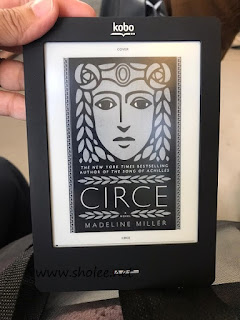 In the house of Helios, god of the sun and mightiest of the Titans, a daughter is born. But Circe is a strange child—not powerful, like her father, nor viciously alluring like her mother. Turning to the world of mortals for companionship, she discovers that she does possess power—the power of witchcraft, which can transform rivals into monsters and menace the gods themselves.

Threatened, Zeus banishes her to a deserted island, where she hones her occult craft, tames wild beasts and crosses paths with many of the most famous figures in all of mythology, including the Minotaur, Daedalus and his doomed son Icarus, the murderous Medea, and, of course, wily Odysseus.

But there is danger, too, for a woman who stands alone, and Circe unwittingly draws the wrath of both men and gods, ultimately finding herself pitted against one of the most terrifying and vengeful of the Olympians. To protect what she loves most, Circe must summon all her strength and choose, once and for all, whether she belongs with the gods she is born from, or the mortals she has come to love.

This book is about Circe, a goddess who has been in shadows all her life until she was banished to an island for revealing she has magic. In Aiaia, she's the queen, the witch, the ruler of her own destiny. This book tells the story of her life's journey, of her hardship, the torments she has to endure to survive and eventually writing her own destiny.

I've come across many rave reviews of this book but I assumed it's overrated. How wrong I was!!! From the first chapter, I was engulfed in a well written, well paced story. So beautifully written that I savour every single word and did not speed read even though I was anxious to know the ending! It may be slow to some but it was magically right for me! Though I've not read The Martian by Andy Weir, I have watched the movie and somehow Circe reminded me of that.

I was able to envision Circe from the day she was born, how she survived being ridiculed and abandoned, when she has to endure all those vital moments. So poignant yet relatable in every walks of life. I could so feel her hostility and her heartaches but yet, she's strong-willed, unwilling to bow down when she knows she's right. I truly loved her attitude in life. I never knew I would enjoy Greek mythology as much.

I applaud Madeline Miller for actually writing such a life journey, a sort of memoir for Circe. I have not read her other novel, The Song of Achilles but now I'm intrigued. She's able to tell Circe's point of view with such angst and I truly feel for her! Maybe it's the feminist side but I guess her being a teacher also did helped to be more accurate and more wordy LOL!


“But in a solitary life, there are rare moments when another soul dips near yours, as stars once a year brush the earth. Such a constellation was he to me.”

For all that she has to endure, Circe has remained as positive as she could. She did not give up easily and her pursuit in life just lived on without hesitation. She stood for what she believes in even though the hurdles were much higher. She truly dare to be different and preached for what she believes in. She's so amazing, definitely a woman of her own destiny.
Email ThisBlogThis!Share to TwitterShare to FacebookShare to Pinterest
Sections: Books