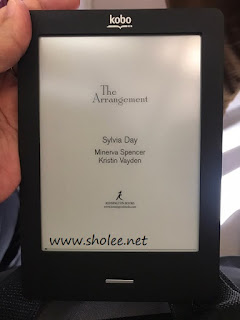 Thanks to Netgalley and Kensington Books for this e-ARC in return for my honest review.

Just so you know, I had a hard time trying to read this on my Kobo Touch as the format size was so small! The fonts were so tiny and when I tried to zoom in, it was hard to scroll as the function was not user-friendly. In the end, luckily there's Adobe Digital Editions so I could read it on my Apple instead.

Anyway, this novel is a collection of 3 historical romance by 3 different authors. I've only read Sylvia Day's so I did expect some hardcore stuff. All in all, I didn't expect it to be a little over the top since it's historical romance. Well, being exposed to historical romance at a young age, I guess I'm kinda old fashion so a little susceptible to adapt to such new concepts LOL!


Mischief and the Marquess by Sylvia Day - Available for the first time since 2007!

Justin, the Marquess of Fontaine, and Lady Sophie Milton-Riley, are completely ill-suited to one another. But they will have to prove it in order to end to their mothers' insistence that they should marry. Yet the more they attempt to demonstrate how wrong their union would be, the more surprisingly, irresistibly right things feel...

The first novella is Sylvia Day's Mischief and the Marquess. As usual, she writes pretty well, adapting to the historical aspect but not as fluently. The story itself was fine but the head-on crude sex does not jive which made it seemed a little over board. It just didn't suit the genre for me and it turned me off. If it's written as current day romance, it would definitely had been a good read for me! Some snippets to share... 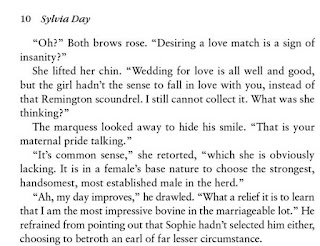 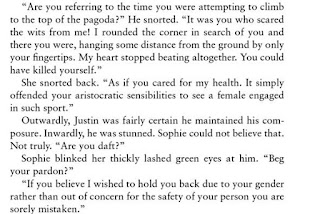 The Duke's Treasure by Minerva Spencer - First time in print!

Plain, prickly Josephine Loman has loved Beaumont Halliwell, the Fifth Duke of Wroxton, since the first time she saw him. But the most beautiful man she's ever met had eyes only for Jo's erstwhile friend, who betrayed Beau's trust by marrying his brother. Beau hasn't been home in years, but when his brother dies in an accident, he must marry to save the impoverished dukedom. And Jo is the overlooked heiress who will turn his world upside down...

The same goes for this second novella, Minerva Spencer's The Duke's Treasure. This was totally a modern take hence I totally forgot it's regency romance so it fared much better. I've not read Minerva Spencer's books so it was quite refreshing for me with the Duke supposedly more chauvinistic but became more humanly due to his new wife. Interestingly, it still reflects the historical aspect at a minimum so I still kept thinking it's modern day romance. Some snippets to share with interesting choice of words /  sentences...

The Inconvenient Countess by Kristin Vayden - First time in print!

As the eldest in a poverty-stricken family of daughters, Miss Diana Katherine Lambson's only option is a marriage of convenience. Her only prospect is a rogue with a miserable reputation. Her only true desire: freedom. And that is exactly what Charles Brook, Earl of Barrington, is willing to offer, in return for the respectability their union will give him. He will even provide Diana with a contract. But does she dare entrust her future to a scoundrel? Does she dare not to?

This final novella actually hits home! Well written prose without overdoing the sex part and keeping it historically seducing! I actually enjoyed this one a lot with all the teasing and fun bantering! Kristin totally killed it with the right pace, right prose with the right amount of sex so appreciating the historical aspects of it all. I've enjoyed being in Diana's and Brook's company from the start to the end! A snippet which I loved... so seductively sweet...

Overall, it has the same plot where the Duke was forced to marry the unintended bride, eventually both fell in love and lived happily ever after. All has the same epilogue where the duchess is pregnant and the duke is happily in love LOL! So if you are looking for a light read, this is the one. I would have finished it sooner if not for my initial hiccup!
Email ThisBlogThis!Share to TwitterShare to FacebookShare to Pinterest
Sections: Books