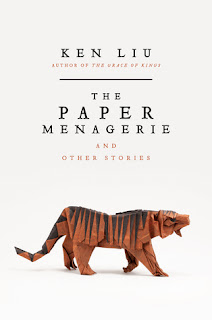 Jack, a little boy from Connecticut, enjoys playing with origami animals that his Chinese mother makes for him and that come to life when she blows into them. As Jack grows into a teenager he tries to fit in with his American friends and starts to ignore the origami animals and his mother, who tries very hard to speak English and change her habits in order to please him. After a family tragedy takes place Jack finds a message from his mother in one of the origami animals and learns about her past.

I was truly surprised at the outcome of this short story. Though I'm not of mixed parentage, I can feel the emotional turmoil that Jack is experiencing. How much he's tried to belong, being American and eventually removing his own mother just because she's Chinese. I felt like I was in a 'Pensieve' (from Harry Potter)... watching, or rather reading, someone's memory, going through his journey. That ending definitely had me in tears. It was well written, such a lovely melancholy read indeed.
Email ThisBlogThis!Share to TwitterShare to FacebookShare to Pinterest
Sections: Books