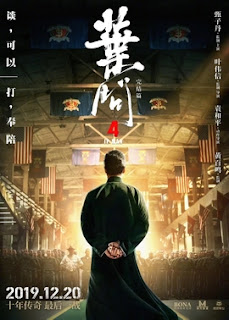 After the death of his wife, Ip Man discovers he has throat cancer from smoking. After his rebellious son Ip Chun fights back against a bully, he gets expelled, and Ip Man decides to travel to San Francisco, United States to look for a school. His student, Bruce Lee, has upset the local martial arts community in San Francisco by opening a Wing Chun school, teaching the Americans martial arts and writing a book on martial arts. [2] He discovers from an associate that a referral letter from the Chinese Consolidated Benevolent Association is needed to get access to the education system. Wan (Wu Yue), the president of the Association, refuses to write the letter as Ip Man does not agree with the grandmasters on Lee's actions. After a fight with Wan, he leaves.

While leaving the school from a meeting with the principal, he chances upon the daughter of Wan, Yonah being bullied by a rival cheerleader, Becky. Ip Man saves her and escorts her home, with Becky accidentally cutting herself with a pair of scissors. Wan accuses Ip Man of using his daughter to get the letter, and challenges him to a fight to get him to write the letter. The fight is disrupted by an earthquake, and Wan tells Ip Man they will finish their fight at the upcoming Midsummer Festival. Ip Man refuses, explains that he merely escorted his daughter home for her safety, and leaves.

Becky complains to her parents that she had been bullied. Her father Walters, who is an officer in the Immigration and Naturalization Service, is pressured into holding the Association responsible and deporting all Chinese associated with them. Meanwhile, Hartman (Vanness Wu), a Staff Sergeant in the United States Marines, attempts to convince Barton Geddes (Scott Adkins), a Marines instructor, to incorporate Chinese martial arts into their hand-to-hand combat training. Geddes proves that the marines' current Karate training is superior by asking him to fight the marines' Karate instructor, Colin Frater, who defeats Hartman. Hartman later convinces the commanding officer to do so, and is instructed to film the Midsummer Festival happening at the Association for research, upsetting Geddes.

I can't believe this is the finale, such heart wrenching and yet nail biting with loads of fighting sequence! Though some moments were slow, it was compensated with much action. Totally enthralling, kept me on my toes from the start until the end of the movie!

The grass is definitely not always greener on the other side. Hence I do agree with Ip Man especially since being an alien on a foreign soil. Though much education was given on racism and what not, we are all humans who will inevitably judge and spur. Kudos to him for realizing it and not forcing his son to do so.

Overall, it's a melancholy one for me. Beautifully portrayed, leaving his legacy untarnished. Donnie Yen has done a marvelous job! So were the rest of the crews especially Vanness! He looked so young and so different!!! Anyway, if you have watched the earlier Ip Man movies, this finale is the closure.
Email ThisBlogThis!Share to TwitterShare to FacebookShare to Pinterest
Sections: Movies