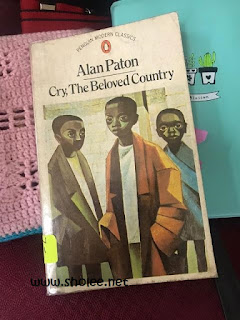 Cry, the Beloved Country, the most famous and important novel in South Africa’s history, was an immediate worldwide bestseller in 1948. Alan Paton’s impassioned novel about a black man’s country under white man’s law is a work of searing beauty.

Cry, the beloved country, for the unborn child that is the inheritor of our fear. Let him not love the earth too deeply. Let him not laugh too gladly when the water runs through his fingers, nor stand too silent when the setting sun makes red the veld with fire. Let him not be too moved when the birds of his land are singing, nor give too much of his heart to a mountain or valley. For fear will rob him of all if he gives too much.

This novel has been divided into 3 parts aka books.

Book 1 is about a Zulu pastor trying to look for his son. Upon receiving news of his sister in jeopardy in Johannesburg, he took the opportunity to also hunt for his missing son. His travel, aside from some mishap, was miraculously smooth with many who helped him unselfishly. It took him a while to finally find his son but in a very sad situation. His son was in prison, accused of murder of a white man. His sorrow took a positive turn at times whilst being helped by many.

Book 2 is about a rich white man losing his son and how the family tried to recover from this unfortunate loss. His son was shot at point blank by a native boy in his house in Johannesburg. Also, both the pastor and the white man are neighbours in the town they lived in, Ndotsheni. Hence a chance awkward encounter between the Zulu pastor and this white man was inevitable, a son of one who has shot the son of the other. Not forgetting the many court proceedings with a sad sentence for one and a happy sentence for the other.

How both of them fare after the sentencing at their respective home was entailed in Book 3. With the additional nephew and pregnant daughter in law in tow, the pastor and his wife had difficulty living through day by day knowing that their son will be hanged soon. Not long after, it seemed like a blessing in disguise with many good happenings in the village like milk for the hungry babies, building of a dam and even rebuilding of the church!

I remembered this book being one of Tun Dr. Mahathir's favourite hence I was curious when I finally got my hands on it. So upon reading it, now I know why..........

This novel was written in a 'sing song' yet ancient prose which was at times hard to digest especially of it's old writing. However, overall, it was gripping yet enthralling from one incident to another which made it hard to put it down. The tragedy of the unwanted murder that took place made a memorable impact, I can totally feel the anguish and sorrow of both parents.

Alan Paton has written flourishly with much empathy and I could truly imagined the fleeting scenes realistically. Though it was written aeons ago, it is definitely relatable as such divided castes, judgemental humans still exist in our current so called civilised world. Being brought up in such environment, it was not easy to diminish such unwarranted thoughts hence this book has enlightened me more.

Apparently this was made into a movie but I've not watched it. This novel also triggered my thought of another similar novel, To Kill a Mockingbird by Harper Lee. I do find that Cry, the Beloved Country a much better read and much more surreal overall. It's depth and nature of the story felt more realistic, as though the author had experienced it all first hand and writing his own memoir, so to speak.

Ending this review with a notable quote:

“Cry, the beloved country, for the unborn child that's the inheritor of our fear. Let him not love the earth too deeply. Let him not laugh too gladly when the water runs through his fingers, nor stand too silent when the setting sun makes red the veld with fire. Let him not be too moved when the birds of his land are singing. Nor give too much of his heart to a mountain or a valley. For fear will rob him if he gives too much.”
Email ThisBlogThis!Share to TwitterShare to FacebookShare to Pinterest
Sections: Books