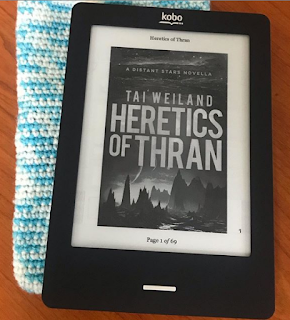 It was supposed to be a simple job: Nab the deviants and drag them home to Planetia. But Commandant Edrich Dekker soon discovers that there is nothing ordinary about his mission. Not the deviants, not the planet they were hiding in and certainly not the "god" they supposedly worship.

This is a surprising good read from a Malaysian author. Though a novella, it's engaging with many strong plots and characters. Well written with superb pace of story, I was truly entertained from the start till the end. It sure does feel like a mix of Star Trek + Elysium + other sci-fi but yet a unique new blend which was enthralling.

The next saga is Shadows of Corinar which was included at the end as an intro next read. An interesting one which I might get next once I have the time :-) The author should continue the saga as it has potential especially since it's different and uniquely Tai Weiland's.
Email ThisBlogThis!Share to TwitterShare to FacebookShare to Pinterest
Sections: Books