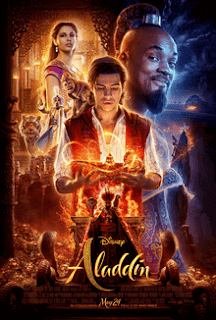 A man with his wife and two children are sailing around the world. The children watch a much bigger and more lavish ship pass by. After the man hears them comment on how much better their ship is, he decides to tell them the story of Aladdin and how bigger isn’t always better.

Aladdin (Mena Massoud), a kind-hearted young street rat living in the desert kingdom of Agrabah, along with his pet monkey Abu, rescues and befriends Princess Jasmine (Naomi Scott), who has snuck out of the palace, growing tired of her sheltered life. She hides her true identity, allowing Aladdin to believe that she is the princess's handmaiden. However, Jasmine rushes home after seeing Prince Anders (Billy Magnussen) has come to court the princess and asks Aladdin to give back her bracelet that he used as collateral to rescue her earlier (which was formerly her mother’s bracelet). However, Abu stole the bracelet back from Aladdin, so Aladdin is unable to give it back to her. Jasmine angrily tells Aladdin that he is a thief and that she was naive to think he was her friend.

Meanwhile, the Grand Vizier Jafar (Marwan Kenzari) grows tired of being "second best". He and his parrot Iago (Alan Tudyk) thus seek a magic lamp hidden within the Cave of Wonders to become Sultan. Only one person is worthy to enter: "the diamond in the rough", whom Jafar later identifies as Aladdin. Later, Aladdin returns Jasmine's bracelet and the palace guards capture him on Jafar's orders. Jafar, after telling Aladdin that he can make him rich enough to impress Jasmine, revealing her true identity to him, has him retrieve the lamp. Inside the cave, Aladdin finds a magic carpet and obtains the lamp. Defying Aladdin's instruction to touch nothing but the lamp, Abu grabs a ruby. Aladdin, Abu, and the carpet rush to escape the cave as it collapses. Aladdin gives the lamp to Jafar, but Jafar throws them back into the cave, but not before Abu steals the lamp back.

This movie is definitely comparable to the previous animated movie of the same name. It's so realistic with the right pacing though at times a little off, not as engaging but overall a fantastic movie.

I've thoroughly enjoyed Mena Massoud's interpretation of Aladdin and he's definitely cute too with that dimple! I'm surprised with Naomi Scott's vocal ability!!! She sings so damn well with much gusto and that range coming from someone petite! The rest of the casts reprised their roles well especially Will Smith as the eccentric Genie who is the 'life' of this movie! Without him, I think Aladdin would be a damper and dull.

I've always loved musicals and this movie is no exception. I was thoroughly entertained from the start and I've enjoyed the songs especially that magic carpet moment... a whole new world... those beautiful monumental moments *goosebumps*
Email ThisBlogThis!Share to TwitterShare to FacebookShare to Pinterest
Sections: Movies