Busy as a bee!

I'm currently on a short hiatus, not on vacation but busy with life!

Life just got in the way...
... with lots of Pokemon Go events and family commitments.
... with Nyc Nat Nook's move from offline to online so been busy brainstorming with partner/hubs on how to grow it online.
... with crocheting, crocheting, crocheting! I've abandoned my reading for the time being but I've enjoyed my crochet time more!
... with work and the tiring walk to/fro office.
... with much more cussing and cursing on board the LRT especially when so many dungu's taking it instead of driving to work after the government announced RM100 fee! Honestly, these dungu's are destined to drive and not take public transport as they are not civic minded and rude at times! Chivalry is dead ya! I hate it when men rushed in to grab/steal seats from the fairer party! Immediately pretends to sleep while sitting 'kangkang' (legs spread widely) as though their balls are damn huge!!! Their idiotic thighs 'raba raba' (rubbing) the fairer parties' next to them!!! Also some dungu's will block the exit path even when the door has opened while we are trying to exit from behind them! Once, the door nearly closed while I was exiting when this woman didn't wanna budge from where she was standing OMG!!! I had to shout loudly 'excuse me' then only she moved an inch!!! I honestly dunno where their so called educated brain is... wearing smartly for the corporate world but behave like first class pain in the ass!!! TV producers can create a series lah based on these dungu's, one scenario/behaviour a day LOL! Trust me, there are plenty and the list can just go on and on and on!

Apologies for getting off track on that but I can't help it. I have to endure my train rides with these dungu's every single working day. They definitely made my ride unpleasant but then there are times when I was blessed to have met kind souls... drab looking men who offered their seat for me... quick thinking people who made way for us to exit... men who sits politely and not kangkang... these are rare occasions. I'm thankful to have experienced such pleasantries so humanity is not dead as yet.

Enough of my rants... time to move on as I still have much to do!!! 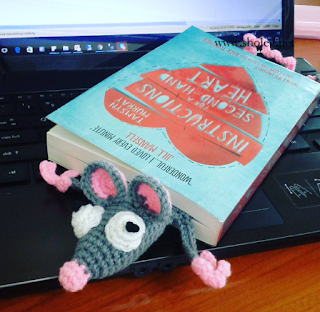 My current WIP, mouse bookmarks! Pattern credit to http://www.supergurumi.com/. Thank you to the nice readers who have been supporting my handmade!!!
Email ThisBlogThis!Share to TwitterShare to FacebookShare to Pinterest
Sections: Thoughts