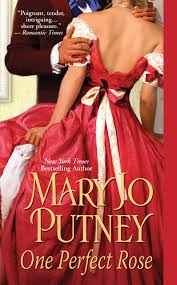 The book is about Stephen who is ailing and has only months to live. All his life, he lived by the rules and in the end, it has costs him much. So for once in his lifetime, he wants to live without rules and left home for a few weeks of reckless living without informing anyone except for his servants. As fate may has it, he met Rosalind who is a stage manager for her family's Fitzgerald Theater Troupe and both of them, unknowingly, fell in love.

The angst, anxiety of being sick and not knowing when he'll die. Unknown to Rosalind that Stephen is actually a duke. The journey they had to endure to be together in the last few months was agonisingly harrowing. At times, the flood gate nearly broke down and I had to hold back especially since I'm in the public, reading this during my commute! This book has all the right dose of ingredients making it into a perfect recipe for romance. Everything just right, not too much nor too little, not too detailed nor too gory, it has simmered into perfection.

Although I've read many romance novels, this is most likely the first time which I've truly enjoyed from the start to the end, salivating each and every page. It had me wanting to flip to the last page just to know the ending! Gosh definitely testing my patience LOL! It did had me thinking how the story will end i.e. with a wrong diagnosis and all but I did not expect that little twist towards the end. That definitely brought the novel to another level!

The only part not as believable was when Rosalind was 3 years old, with those flashbacks about how her parents died, her saviour Maria and Thomas, her scavenging months, etc. It would have been better if she was aged a little older i.e. 6 then it would have been much better. Anyway, it's just a small peck of the novel.

To be honest, I would not have picked this up if it's not for KLBAC Romance Book Discussion pick. Apparently this is one of the member's all time favourite and now I know why. It has all the concoction to be one of the best with the right measurement of fluffiness. So endearingly swoon worthy if you asked me!

I seldom detoured from my usual favourite authors for romance as I do have lots in my TBR to read. Well, too much to read with so little time... most reader's trauma! I would safely say Mary Jo Putney has officially gained a rank on my favourite romance authors list. Having found out this is book no 7 of Fallen Angels series, I might just go hunting for the rest! There goes my TBR!!!

There were a number of swoon worthy quotes but, alas, reading an e-book made it difficult for me to mark it. I've only managed to screenshot these: 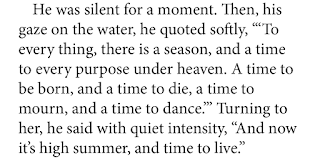