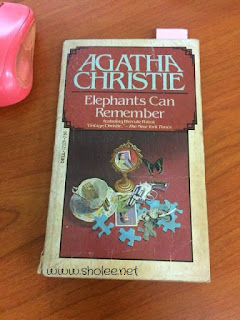 Mrs Oliver was recently approached by a Mrs Burton-Cox during a literary luncheon, regarding Mrs Oliver's god-daughter Celia's past. Though she was offended by the crudeness of Mrs Burton-Cox, Mrs Oliver in turn became intrigued of the event of the past. Celia's parents were shot dead near their house during an evening walk and their case was regarded as unsolved, a total mystery. In came Hercule Poirot assisting Mrs Oliver to investigate the case to find out the truth of what actually transpired, happened and solved the mystery itself.

I have never known how it's like having a twin brother or sister but this book definitely opened my literary eyes. Being identical twins at that with one having a mental issue, it's something I never thought would have happened in the past but only in current times due to the stress factor in life. So now I know, such thing does exist way back then!

This is definitely an interesting take on a crime fiction. Though at the start the story was a mystery, gradually, the plots started filling in and by midway I can roughly gauge the actual mystery and who did it. It was an engaging ride and I was intrigued to keep on continuing just to know the exact ending.

I can see why Agatha Christie is one of the best crime fiction author here. Apparently this is a lesser known book but it was truly well written. In fact, I like this book better than Murder on the Orient Express! If you enjoy reading crime fiction, this will be up your alley though do keep in mind the English prose back then - easy to understand but with a different twang to it.
Email ThisBlogThis!Share to TwitterShare to FacebookShare to Pinterest
Sections: Books