MPOV: The Diary of a Young Girl 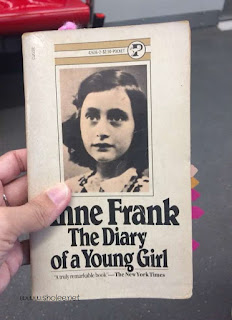 Anne Frank had started writing in her diary when she first received one during her 13th birthday, a gift from her parents. She has written the ups and downs of her short life, mostly of their 2 years in hiding away from Hitler's Nazi regime. Throughout this tumultuous time at the 'secret annex', aside from sharing her secrets with Kitty (her diary's name), Anne has also documented the daily habits and nature of the other 7 tenants i.e. her father, mother, sister, Mr. Van Daan, Mrs Van Daan, their son Peter and Mr Dussel; their daily grouses, complaints, their bored, incompetent times including her own dreams, nightmares and wishes.

One can definitely relate to her being confined and felt her boredom, lack of communication plus growing up and becoming wiser in that 2 years. Her positive mindset in maintaining sanity was incredible as I would have been driven mad by then. With her ability to let out her grouses via her diary, it's a healthy sense since Anne was able to digress her thoughts more eloquently thus keeping her sane.

I could not fathom her age while reading her diary, as it was well expressed and written with acute sense of adulthood although there were still hints of that teenage tantrum and bickering. One wouldn't have expected a teenager of 14 could write explicitly well, so well that I kept thinking she's older. She would have made a good journalist if she's still alive, that's for sure.

Anne Frank has definitely "lived up" until today, making sure we don't forget the bloodied scars of war, the sufferings of many victims and the loss of many innocent souls. If only she had held on in just a couple of months more and she would have been free, reunited with her beloved father. Well, as it turned out, everything happens for a reason. Her diary and notes still live on, inspiring more humans in the years to come. Though this is just a diary of a young girl but it did prompted me to be more thankful in life, to be more grateful with what I do have and feeling blessed overall. Read it and be inspired to just live.
Email ThisBlogThis!Share to TwitterShare to FacebookShare to Pinterest
Sections: Books