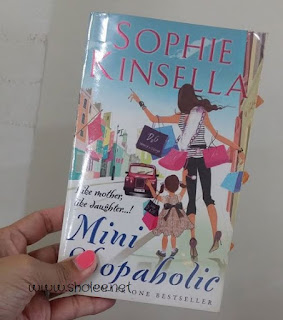 A continuation from the Shopaholic series, Mini Shopaholic is partly about Becky's toddler, incidentally named Minnie which had me thinking of my own dog as her name is Minnie too LOL! Anyway, this is book no. 6 of the series and it's a mixture of toddler tantrum plus shopping ban plus birthday party. All in all, it's Becky's struggle of her everyday life after the Bank of England has declared bankrupt and everyone in England has been hit by the financial crisis. She's still adamant to shop and throw a grand birthday party for Luke during this budget laden times. Will she be able to pull it off?

It sure is relatable as with the current volatile economy, we are heading into inflation. Many businesses have gone bust and prices have hiked up which has become a burden to most of the middle income earners. Like us. But like Becky, life is short so we should live it to the fullest, right? Why do we need to ban shopping? Why can't we reward ourselves? Why shouldn't we celebrate birthdays?

Mini Shopaholic was hilarious from the start and I was definitely entertained. As usual, I've enjoyed Becky's aloofness, clumsiness and ignorance. Thank goodness for Luke, the solid backbone for Becky to lean on and now with Minnie in the picture, an additional "terrible two" shopaholic in the making LOL! With the usual casts supporting Becky's journey, don't expect much distinct nor puny plots but a well expressed and written prose which made Shopaholic a success. If you are looking for something light and entertaining to read, this is a worthy book to go for, just as long as you don't hike up your expectation much.


Never give up on something you really want. However impossible things seem, there's always a way.