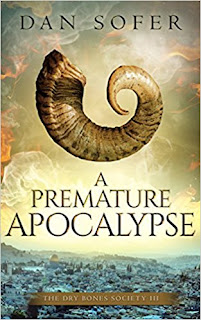 The final novel in the award-winning Dry Bones Society trilogy.

WORLD WAR III IS THE LEAST OF HIS PROBLEMS...

World War III inches nearer and the planet's fate dangles by a thread. With time running out until the End of History, Moshe must overcome unimaginable obstacles and diabolic opponents to fulfill his destiny... and uncover the shocking truth of the long-awaited Redemption!

Elsewhere in Jerusalem, a lovesick suicide bomber gets a lucky break, a reformed criminal makes a devastating decision, and a broken prophet defies death one last time.

The above taken from Goodreads. I've received this e-ARC in return for my honest review.

Finally finished reading the last book of The Dry Bones Society trilogy! I had not expected it to end so soon! Trying hard not to reveal much so as to stay spoiler free! In summary, open communication and teamwork are the key fundamentals to a successful relationship be it in a family or at work.

Oh well, it's not a zombie apocalypse as I had hoped for but more about the current political turmoil in Israel which has been 'fictionised' into this trilogy. Of Jews and Gaza, of Resurrection and Redemption, of Messiahs and Prophet, with the American - Russian - Israel politics and fake news in abundance. It is so realistically relatable and current with the ideal ending the author has in mind for his country.

Fast paced with straight forward prose, I can imagine the end in mind even though I was midway through. However, there were a few unexpected ones which made it more enthralling! It's an awesome read with a full circle, ending with a triumphant note... a 'happy ever after' kinda ending. Such detailed plots with many curve balls were so engaging from the start and it's truly nice that it ended with a BOOM!

As this is a trilogy, you can get all 3 books from Amazon. This last book is available for pre-order now at Amazon from link as per below:
https://www.amazon.com/gp/aprematureapocalypse
Email ThisBlogThis!Share to TwitterShare to FacebookShare to Pinterest
Sections: Books