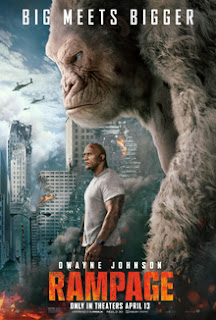 Released: April 12, 2018
Director: Brad Peyton
Casts: Dwayne Johnson, Jeffrey Dean Morgan, Breanne Hill, Naomie Harris
Rated: PG-13 (However, in Malaysia, such rating is pointless as there were many noisy toddlers and children in the cinema)

Athena-1, a research station owned by gene manipulation company Energyne, is destroyed after a laboratory rat mutates and wreaks havoc. A crew member, Dr Kerry Atkins, is ordered to retrieve research canisters containing a pathogen by CEO Claire Wyden. Atkins is able to flee in the escape pod, but it disintegrates upon reentry, killing her and leaving a trail of debris across the United States, including the Everglades, where a canister is consumed by a crocodile, and a forest in Wyoming, where a wolf is exposed to the pathogen.

Primatologist Davis Okoye, a former US military soldier and member of an anti-poaching unit, is a primatologist in a San Diego wildlife preserve. He befriends a rare albino gorilla named George, whom he saved from poachers. One night, as Davis drives home from work, one of the canisters crash lands in George's habitat. George is exposed to the pathogen when he checks it out.

George grows considerably larger and aggressive overnight. Davis is contacted by Dr. Kate Caldwell, a genetic engineer who explains that the pathogen was developed by Energyne to rewrite genes on a massive scale. She had hoped to advance CRISPR research as a potential cure for disease, but discovered that Energyne planned to use it as a biological weapon. The company fired her and sent her to prison for attempting to expose them. George escapes from captivity and goes on a rampage at the preserve. Davis calms him down but George is captured by a government team led by Agent Harvey Russell, and is put on a plane. Meanwhile, Claire and her brother Brett send a squad of mercenaries led by Burke to capture the mutated wolf, Ralph, but they are all killed.

Overall, it's thin plotted but action-packed with especially cool CGI! Truly entertaining and engaging from the start to the end. I so loved George and his cheeky little antics! Love-able yet scary at the same time! The casts were well rounded with The Rock being in the lead as usual though Agent Russell does take the cake for being the 'silent killer'! A movie worth watching at the cinema for the obvious reasons lah!
Email ThisBlogThis!Share to TwitterShare to FacebookShare to Pinterest
Sections: Movies