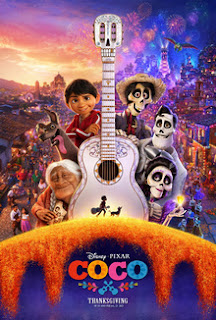 In Santa Cecilia, Mexico, Imelda Rivera was the wife of a musician who left her and their 3-year-old daughter Coco, to pursue a career in music. She banned music in the family and opened a shoemaking family business. Ninety-six years later, her great-great-grandson, 12-year-old Miguel, now lives with Coco and their family. He secretly dreams of becoming a musician like Ernesto de la Cruz, a popular actor and singer of Coco's generation. One day, Miguel inadvertently damages the photo of Coco with her parents at the center of the family ofrenda and removes it, discovering that his great-great-grandfather (whose face is torn out) was holding Ernesto's famous guitar.

Concluding that Ernesto is his great-great-grandfather, Miguel ignores his grandmother Elena's objections and leaves to enter a talent show for the Day of the Dead. He enters Ernesto's mausoleum and steals his guitar to use in the show, but becomes invisible to everyone in the village plaza. However, he can see and be seen by his Xoloitzcuintli dog Dante and his skeletal dead relatives who are visiting from the Land of the Dead for the holiday. Taking him there, they realize that Imelda cannot visit as Miguel removed her photo from the ofrenda. Discovering that he is cursed for stealing from the dead, Miguel must return to the Land of the Living before sunrise or he will become one of the dead: to do so, he must receive a blessing from a member of his family using an Aztec marigold petal that can undo the curse placed upon him by stealing Ernesto's guitar. Imelda offers Miguel a blessing but on the condition that he abandon his musical pursuits when he returns to the Land of the Living; Miguel refuses and attempts to seek Ernesto's blessing.

Miguel encounters Héctor, a down-on-his-luck skeleton who once played with Ernesto and offers to help Miguel reach him. In return, Héctor asks Miguel to take his photo back to the Land of the Living so he can visit his daughter before she forgets him and he disappears completely. Héctor attempts to return Miguel to his relatives, but Miguel escapes and infiltrates Ernesto's mansion, learning along the way that an old friendship between the two deteriorated before Héctor's death. Ernesto welcomes Miguel as his descendant, but Héctor confronts them, imploring Miguel to take his photo. Miguel soon realizes that Ernesto murdered Héctor using a poisoned drink and stole the songs he had written when Hector had decided to return home having become homesick. Ernesto then passed Hector's songs off as his own to become famous. To maintain his legacy, Ernesto steals the photo and has Miguel and Héctor thrown into a cenote pit.

I just loved this animation! So colourful, vibrant, filled with so many emotional chaos plus it is original! Even the songs were catchy and so relevant. Remember Me is such a heart-warming song! I'm in awe with the plots especially when it's all about family values and traditions. This is such a memorable movie, a must watch with the family!
Email ThisBlogThis!Share to TwitterShare to FacebookShare to Pinterest
Sections: Movies