MPOV: A House of Happiness 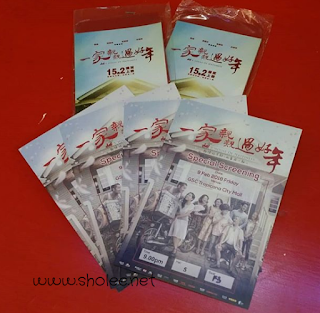 Bad-tempered Uncle Shui suffers from Alzheimer's disease but he can at least remember that his wife Summer has died and his son Liong Gor is working in the city. Ha Gu stays with him and takes care of him but she leaves him when she cannot stand his bad temper anymore. He then falls in love with a woman who looks a lot like his late wife. Liong Gor is called by back the neighbours to help his father cope with living alone but Liong Gor hides a secret and is worried of its impact on his family.

The above taken from www.cinema.com.my.

Overall, this is a very funny movie from the start to the end! Even with the few touche moments, it's still funny with a tinge of tears LOL! I've enjoyed it a lot, laughing from the moment it started till the end! Even Angels and hubby enjoyed it pretty much!

We were offered the tickets unexpectedly and since we had nothing much to do, we went ahead and watched this movie last week. It's a special screening of the movie with a special appearance by the director, JY Teng, and the lead actor, Chan Fong. Thankfully, it turned out to be a very good quality, local production with a good story line and many comedic plots. Truly a 'special screening' worth watching!
I was surprised by the many talents in the movie. Aside from Richard and Mimi who were from Hong Kong, the rest of the casts are Malaysians and they were a talented lot! The many emotional levels were portrayed efficiently with the roles so well rounded. The plots were so seamless with our full attention on the movie. Of course, it has many emphatic plots based on current social stigma pointed out in the movie. This is what I do like about local movies. It's story line is always realistic and on point, not generalised with blank plots.

It's a movie worth watching with the family during Chinese New Year. Definitely worth every penny! FYI, it's in Cantonese, thank goodness for me or I'll be busy reading subtitles!
Email ThisBlogThis!Share to TwitterShare to FacebookShare to Pinterest
Sections: Movies