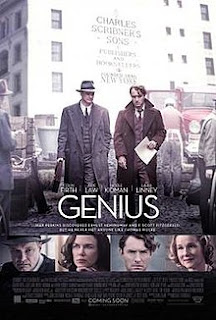 The film is set in New York in 1929. Maxwell Perkins, a Scribner's successful editor and discoverer of talented authors such as Francis Scott Fitzgerald and Ernest Hemingway, lives in a cottage just outside the city with his wife and five daughters. One day, in his office, he reads the drafts of O Lost, a novel by Thomas Wolfe. Struck by the content, Perkins decides to publish it and begins to collaborate with the author. The novel is eventually published and proves to be a huge success: fifteen thousand copies sold in a single month. Max and Thomas become best friends, while Wolfe's relationship with Aline Bernstein, a married woman twenty years older than he, is severely tested after the publication of the Wolfe's novel. Max manages to publish Wolfe's second novel, Of Time and the River, after exhausting revision work that lasted for years. The second novel is also a success.

Meanwhile, Thomas is in Paris where he follows the events only remotely, thanks to the news received from Max. Back in New York, he immediately goes to work, writing his new book. His turbulent character leads him to quarrel with Max, destroying the relationship between the two and making Wolfe turning to another editor. Aline finally leaves Thomas, because he is too self-absorbed and unable to care for others. When Max has reconciled himself with Thomas's absence, a phone call comes from Thomas' mother: Thomas has been reported to contract milial tuberculosis. Despite the surgery, Thomas shows no signs of improving. After a few weeks Wolfe dies, but he writes a letter to Max, reaffirming his immense affection for him.

I've never read Thomas Wolfe before so it's an eye-opener watching this biopic between him and his editor, Maxwell Perkins. Fitzgerald and Hemingway were also featured briefly so it sure made this more realistic since I've known and read their books before. This movie did show Thomas' not so gentlemanly side with the way he treated others plus how selfish and self-absorbed he was then. However, it truly was such a waste that a young talent had to die early. I do applaud Maxwell, aside from being a successful editor, for being so professional yet ethically right.

It did feel like an honest biopic with a dramatic yet talented casts. The way Jude carried Thomas was eccentric! Even Nicole's Aline was such a drama queen! This memorable movie has piqued my interest. So it's time to look for and read a Thomas Wolfe.
Email ThisBlogThis!Share to TwitterShare to FacebookShare to Pinterest
Sections: Movies