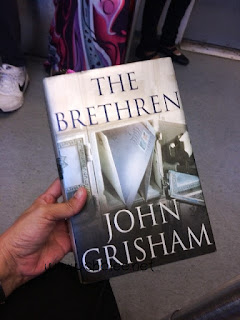 And three former judges who call themselves the Brethren: one from Texas, one from California, and one from Mississippi. They meet each day in the law library, their turf at Trumble, where they write briefs, handle cases for other inmates, practice law without a license, and sometimes dispense jailhouse justice. And they spend hours writing letters. They are fine-tuning a mail scam, and it's starting to really work. The money is pouring in.

Then their little scam goes awry. It ensnares the wrong victim, a powerful man on the outside, a man with dangerous friends, and the Brethren's days of quietly marking time are over.

This definitely affirmed that I should watch legal or political type on TV or cinema and never to read it. I just couldn't get passed through chapter 3! I'm stuck with either 'Did Not Finished' or 1/5 rating as I did skipped to the last 2 chapters just to know the ending. What say you?

Apologies to Grisham's fans... he sure writes well but the lawyer/ political plots are just not my cup of tea. Maybe a different genre would have been a better read for me. I guess I'll park it as DNF to be fair lah...
Email ThisBlogThis!Share to TwitterShare to FacebookShare to Pinterest
Sections: Books