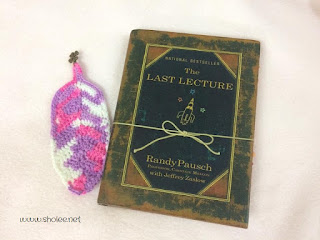 This book revolved around Randy Pausch's Last Lecture at Carnegie Mellon University after he was diagnosed with terminal pancreatic cancer. He has shared his anecdotes, dreams and life lessons as a lecture for his young children. It was recorded so that they could watch and understand it when they are older. His lecture entitled "Achieving Your Childhood Dreams" was so popular that it's been shared on many social media platforms! The same goes for this book which he wrote for his children so that they would know who their father was, aside from the recorded lecture, videos and their mother's story, and his legacy will continue to live on.

This book is so successful mainly due to this ONE key factor, "OPTIMISM". No matter how low or how down, optimism will lift you up. This is how I see it especially since Randy was diagnosed with pancreatic cancer with only months to live. In fact, he has extended a few more months of his life with such optimism! Well, he was brought up to believe in his dreams and to think optimistically. I definitely liked the way his parents thought him to be frugal, non-materialistic and very grounded on his feet. Thus sharing his pasts, he had hoped to lecture these key points to his children. His very successful "head fake" so to speak LOL!

I truly enjoyed this non-fiction mainly because of the way it was written. Aside from inspiring, it was straight-forward and honest, so full of positive anecdotes and optimistically self-assured. The way he phrased his sentence, when he spoke, it always sounded positive. Of course, there were some downsides which Randy had mentioned in passing though he did not dwell on it much. In a way just to proof that he was indeed human plus also the reason why he and Jai had seen a counsellor. Coping with death is a horrifying experience, but Randy had laid it that at least he knew his timeline... he still had the chance to complete his circle and able to finish his milestones, hence leaving this world with no regrets. You can see how optimistic he was in his opinion of his shortened life.

Randy's optimism does rub a little on me after I've finished the book. On second thought, I think I should make if my life's goal to be optimistic and positive until the day I die! It's not an easy feat especially since I was brought up in a pessimistic environment but it's worth exploring and learning. He was trained since young so I have to work really hard to reach his level at my age LOL!

Some of his notable quotes that is inspiring to me:


Whatever my accomplishments, all of the things I loved were rooted in the dreams and goals I had as a child... and in the ways I had managed to fulfil almost all of them.

When you're screwing up and nobody says anything to you anymore, that means they've given up on you.

What we really want them to learn is far more important: teamwork, perseverance, sportsmanship, the value of hard work, an ability to deal with adversity. This kind of indirect learning is what some of us like to call a "head fake".

Luck is what happens when preparation meets opportunity.

I definitely liked this one:


Experience is what you get when you didn't get what you wanted.

My personal take on optimism is that as a mental state, it can enable you to do tangible things to improve your physical state.

Randy's message to his children:


I want you to become what you want to become.

A couple of new words:
Oratorical - relating to the art or practice of public speaking
Machiavellian - cunning, scheming and unscrupulous, especially in politics
Email ThisBlogThis!Share to TwitterShare to FacebookShare to Pinterest
Sections: Books