MPOV: The Hundred-Year-Old Man Who Climbed Out The Window and Disappeared 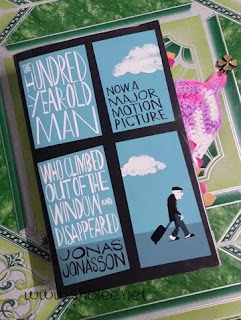 This book revolves around Allan Karlsson's life from when he was young until he's a centenarian. It flips back and forth from the moment he stepped out of the window of the old folk's home he's been staying. He never liked the limelight nor Director Alice hence the desire to leave the home as soon as possible. After walking the distance to the nearest bus station, Allan has unintentionally gotten involved in a mob-chasing adventure after he had taken along a money-loaded suitcase on board a bus leaving town. From there on, his journey became an exciting one where he forged friendships while on the run with Julius, Benny, Gunilla, Bosse and Gaddan.

Along the way, there are flashbacks to his earlier life when he's a bomb expert, meeting so many influential politicians like Harry Truman, General Franco, Stalin, Mao Tse-tung, Soong Mei-ling, Kim Jong-il, Winston Churchill and his good friend, Herbert Einstein.

Initially, I did find the book a little slow but then the story line was engaging, slowly but surely kept me on my toes, laughing my guts out! A hilarious book bringing me around the world and through many years of history via Allan's journey as a atom bomb expert, nothing short of an adventurous explosion. I did not expect the comically slyness of this old man and his unbecoming slates of good luck which made the book 'unputdownable'!

The fact that it was translated did not bother me as it was seamless! I definitely loved this exceptionally awesome book! Indirectly, it did show that life's a full circle and karma does get in the way. With the many humorous, adventurous plots, there are some quotes which I particularly liked, reflecting on Allan's life lessons:


Things are what they are, and whatever will be will be.

I can so relate to this:


Allan hadn't listened very carefully to the global political aspects of the plan, because when people started talking politics then he stopped listening. It sort of happened by itself. 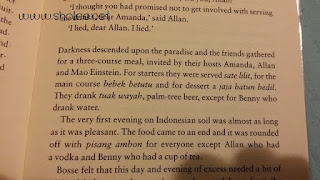 Also, Allan's sensitive side was explored minimally towards the end: 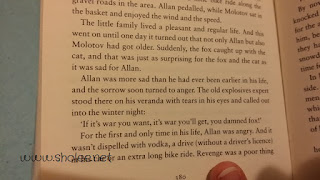 Some new words:
Heifer - (in farming) a cow that has not borne a calf, or has borne only one calf
Apropos - with reference to; concerning
Pedagogical - relating to teaching
Reveille - a signal sounded especially on a bugle or drum to wake personnel in the armed forces
Teetotaller - a person who never drinks alcohol
Disarmament - the reduction or withdrawal of military forces and weapons
Exegesis - critical explanation or interpretation of a text, especially of scripture
Irascible - having or showing a tendency to be easily angered
Email ThisBlogThis!Share to TwitterShare to FacebookShare to Pinterest
Sections: Books