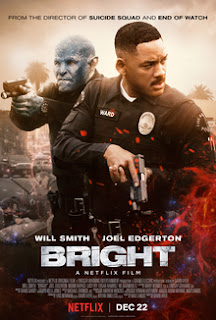 In an alternate present, humans live in uneasy peace with orcs, elves, centaurs, dwarves and other races after they fought for thousands of years. In Los Angeles, veteran LAPD police officer Daryl Ward has been involuntarily partnered with Nick Jakoby, the nation's first orcish police officer. Jakoby is ostracized by humans for his race, and by orcs for his position. In addition to the push-back from other officers, Ward is ambivalent towards him after an incident where Ward was shot and Jakoby apparently let the orc assailant get away. During a trip back to the station, an arrested Shield of Light devotee tells Jakoby (in Orcish) that both officers are in a prophecy and that Ward is blessed. While Jakoby is booking the prisoner, Ward is approached by Internal Affairs who say they believe that Jakoby put his ethnic loyalties before his partner. Ward is pressured to try to have Jakoby confess on tape so they will have publicly acceptable grounds for a firing.

That night, Ward and Jakoby respond to a disturbance at what turns out to be a Shield of Light safehouse; inside are a number of corpses, and also the still-living torso of an elf woman embedded in a wall. They apprehend the lone unhurt survivor, a young elf named Tikka in possession of a wand. As Jakoby puts it, a wand is like "a nuclear weapon that grants wishes", and can only be commanded by a 'Bright' - a rare person. If a non-bright touches it, they will explode.

When four officers arrive as backup, they decide to stage the killing of the two officers and keep the wand for themselves. They coerce Ward into accepting to kill Jakoby, telling Ward he will be spared in return. Ward goes outside to Jakoby and holds him at gunpoint, asking him about the orc assailant. Jakoby admits to letting the suspect escape but only because he mistakenly cornered the wrong person and realized the responding officers would most likely execute any orc suspect. Ward makes a split decision to gun down all of the corrupt officers. The incident, however, attracts the attention of the local human gang, Altamira, and the two flee under fire with Tikka and the wand. Leilah, an Inferni member and owner of the wand, arrives at the safehouse minutes later, searching for the wand and Tikka.

I am truly surprised watching this movie as it did reminds me of a movie, somewhat similar LOL! Well, it is like Lord of the Rings in a modern world setting. Instead of the ring, it is the magic wand they are fighting for. Modern elves, fairies and orcs a plenty in this movie. Even Harlem was not spared as it's shown as the orc's hood. Overall, it's entertaining though not as unique as I kept referencing it back to LotR LOL!

With the way it ended, I'm not surprised a sequel is in the making. I sure hope there will be more elves and fairies this time plus Ward handling more magic wands!
Email ThisBlogThis!Share to TwitterShare to FacebookShare to Pinterest
Sections: Movies