MPOV: Mune: Guardian of the Moon 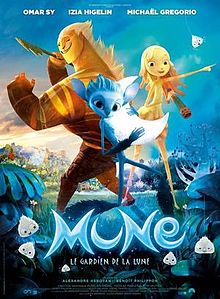 In an imaginary world, a small Sun and Moon were made by the first Guardians to warm up a small planet inhabited by different marvelous people. The Guardians follow generations after generations and preserve the harmony of the world. The people of the day and those of the night live in relative harmony, even though they are very different from each other. But in the depth of the planet, Necross awaits the opportunity to set darkness over the world.

The day is approaching when Sohone, the apprentice of Xolal, Guardian of the Sun and Leeyoon, the apprentice of the Guardian of the Moon will take over from the present Guardians. On the day of their induction, the light of the Sun accepts Sohone as planned. Leeyoon however is avoided by the lunar Ewe that is responsible for choosing the Guardians. The Ewe chooses a Faun named Mune instead. On the following night an upset Leeyoon is visited by pale snakes who stir up his jealousy and advise him to pit Sohone against Mune. Meanwhile, Mune has troubles maneuvering the temple of the Moon correctly: the temple leaves its path and interferes with Sohone. While Sohone leaves his temple to scold Mune, Necross sends his two imps to steal the Sun and bring it to him. Necross makes the Sun die off gradually. Night falls everywhere, and a distressed Mune is banished from his own people.

Mune and Sohone both set out on a quest to find the vanished Sun, accompanied by a young girl named Glim. Thanks to her knowledge in astronomy and the ancient stories of how the world came together, the group is able to pass the Great Blue Hole, a lake under which the great abyss opens that leads to the depths of the world. Mune watches over Glim since she could freeze and break in the cold water. While underwater, the group meets Phospho, an old Guardian of the Moon. He wakes Glim up and leads them to the entrance of the world of darkness, where Necross lives.

I just love the animation, brilliantly made, so beautiful like wanderlust... the imagination definitely taken to another level! Overall, it was an engaging movie with some twists yet at times a little predictable but entertaining nevertheless. So unique with such imaginary plots, I was immediately taken by it's breathtaking colours! Great to watch with the family for sure!
Email ThisBlogThis!Share to TwitterShare to FacebookShare to Pinterest
Sections: Movies