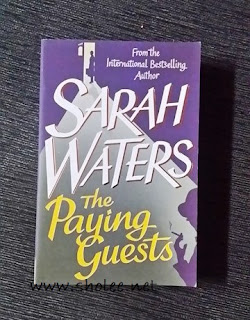 It is 1922, and London is tense. Ex-servicemen are disillusioned; the out-of-work and the hungry are demanding change. And in South London, in a genteel Camberwell villa—a large, silent house now bereft of brothers, husband, and even servants—life is about to be transformed, as impoverished widow Mrs. Wray and her spinster daughter, Frances, are obliged to take in lodgers.

With the arrival of Lilian and Leonard Barber, a modern young couple of the “clerk class,” the routines of the house will be shaken up in unexpected ways. Little do the Wrays know just how profoundly their new tenants will alter the course of Frances’s life—or, as passions mount and frustration gathers, how far-reaching, and how devastating, the disturbances will be.

Short-listed for the Man Booker Prize three times, Sarah Waters has earned a reputation as one of our greatest writers of historical fiction.

Firstly, I would affirmed that Sarah Waters' prose is not my cup of tea. I can never understand the need for this book to be so thick and heavy with many unnecessary fillers, lengthy prose and dragging plots at times. Maybe it's the way it was written to reflect the 20's twang but I found it not as entertaining. I practically breezed through aka speed read the first half!

Thankfully, the remaining second half where the actual plot started was engaging at some point and did had me intrigued to find out how it would actually ends. Well, the ending was not what I have expected, it actually fell short! So all in all, it felt melancholy, drama-ish a little with the perfect English spoken characters. Aside from the tantalising lesbian relationship, the accidental murder piqued the book a little but that's about it.

Sarah Waters writes with LGBT plots in mind, which is fine by me as it's something different. It may be a taboo way back then where her plots usually take place but it did feel a little modern to it. Perhaps influenced by her linguistic approach or similar current scenarios, I kept imagining the story as of now and not back then. I'm not a pro in historical fiction but this is just my two cents.

Some noteworthy mentions:
Anna Karenina - I have yet to read any of Tolstoy's books, let alone this, but apparently it's been highly credited so will have to dig it out from my TBR pile one of this days.

Ashtray stand which killed Leonard - This had me at a lost for words as Lilian was supposedly weak, having lost so much blood but she still have the strength to pick up an ashtray stand and whacked Leonard's head! I assumed it's a heavy one as just a blow and Leonard bled to death! If it's a light one, I don't think it'll do much damaged.

Anyway, here are some new words:
Titivate - make oneself look smart.
Blusterer - loud, aggressive or indignant way with little effect.
Alembic - a distilling apparatus, now obsolete, consisting of a gourd-shaped container and a cap with a long beak for conveying the products to a receiver.
Suffragette - a woman seeking the right to vote through organised protest.
Balustrade - a railing supported by balusters, especially one forming an ornamental parapet to a balcony, bridge or terrace.
Kelter - out of harmony or balance.
Email ThisBlogThis!Share to TwitterShare to FacebookShare to Pinterest
Sections: Books