MPOV: That girl in pinafore 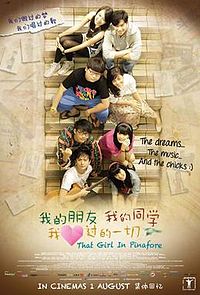 The story was set in the 1990s. Secondary school student, Jiaming (Daren Tan) was coping with both his O-level examinations and his parents' bar business, the Dream Boat. He and his mates Cao Gen (Seah Jiaqing), Hao Ban (Kenny Khoo) and Xiao Pang (Kelvin Mun) were studying. When a dare to get the numbers of two nearby girls, Jayley and Hayley Woo, went awry, the boys ran away. Jiaming bumped into the twins' friend, May (Julie Tan), while doing so, consequently dropping his Xinyao booklet.

After receiving their O-Level results, Jiaming decided to drop school, having already retained for two years, while the rest of the boys moved on. Coincidentally, they were placed in the same Junior College as the three girls they had met earlier. On the first day of school, the boys started a short-lived pornographic magazines business and were suspended from school for a month's time. Meanwhile, Jiaming visited the junior college to hang out with his friends and was attracted by a familiar music tune into an empty school assembly hall. There, he discovered May playing the song on the piano from the Xinyao book that he dropped earlier. He confronted her to repossess his book but was interrupted by three school bullies, whose leader said that May was his. Jiaming left the scene after a conflict with the bullies. Eventually, he met up with his three friends and learned about their suspension.

The boys became aware of Xinyao singing contest with a winner's purse of $5000. Jiaming suggested that they join the contest and they form a band. After their own auditions, the boys bumped into the girls, who had tried their luck in the contest too but lost out because of technical difficulties. They decided to work together with the boys, forming a collaborative band. Subsequently, they were asked to perform at and advertise the Dream Boat.

Recently caught this movie on Astro and I can't helped thinking of the consequences if May's mother had behaved differently. It was definitely spot on especially for Asian parents on how they want their children to succeed their long lost ambitions or assumed their life long dream overseas. All in all, this is an eye-opener, a reminder to all parents. Never ever assumed your children do not know what they want. Let them bloom and learn from their mistakes or else they can never grow mature.

I am surprised on this movie's outcome... good castings with a great albeit educational story plots. Funny yet sad with dramatic events and on point with social stigmas. All those funny jests about language, religion and what nots made the movie so relevant.
Email ThisBlogThis!Share to TwitterShare to FacebookShare to Pinterest
Sections: Movies