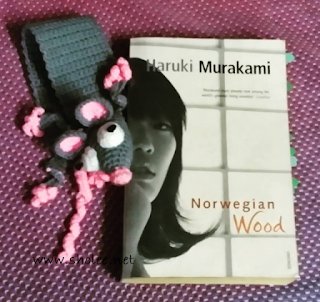 Toru, a quiet and preternaturally serious young college student in Tokyo, is devoted to Naoko, a beautiful and introspective young woman, but their mutual passion is marked by the tragic death of their best friend years before. Toru begins to adapt to campus life and the loneliness and isolation he faces there, but Naoko finds the pressures and responsibilities of life unbearable. As she retreats further into her own world, Toru finds himself reaching out to others and drawn to a fiercely independent and sexually liberated young woman.

A poignant story of one college student’s romantic coming-of-age, Norwegian Wood takes us to that distant place of a young man’s first, hopeless, and heroic love.

This book tells the tale of a loner Toru during his college years and what transpires with his few close friends. I find that it is somewhat similar to The Perks of being a Wallflower but in a different light, view and background. Also, the title is taken from the Beatles' Norwegian Wood which was mentioned many times in the book.

Overall, it's narrated by Toru and mostly revolved around his relationship with Naoko, who was his best friend Kizuki's girlfriend until he committed suicide at the age of 17. They both shared the pain and sadness left behind by Kizuki, keeping the friendship bond alive after a chance meeting at a train station until one day when Naoko disappeared suddenly. Toru's obsession with Naoko from the start was romantically inclined until he met Midori. Storm Trooper, Nagasawa, Hatsumi and Reiko made up the gaps along the way.

This book has more in-sights psychologically like depression and mental illness leading to suicide making it so relevant in current society. It also highlighted social stigmas such as booze, sex, one night stand and lesbianism which were taboos then but relevant now. The college lives then are no different as compared to today.

With detailed characteristics and plots, who would have thought it was translated from Japanese. It was seamless as though it was originally written in English. I've enjoyed the whole book except for that last paragraph! Mr. Murakami, why must you end the story with a twisted paragraph? I'm going to ignore that and savour the story until just before that last paragraph.

A couple of distinct quotes:
"Death exists, not as the opposite but as a part of life."

This in relation to books as Toru loves to read:
"With my eyes closed, I would touch a familiar book and draw its fragrance deep inside me. This was enough to make me happy."

A couple of new words:
Minnow - a person or organization of relatively small size, power or influence
Calisthenics - gymnastic exercises to achieve bodily fitness and grace of movement
Email ThisBlogThis!Share to TwitterShare to FacebookShare to Pinterest
Sections: Books