Wayan is back!!! LOL! Well, we were comfortable with him hence we were happy that he's back as our tour guide!

First destination: Tirta Gangga - entrance fee is IDR 30,000 per pax
Tirta Gangga is a former royal palace in eastern Bali, Indonesia, about 5 kilometres from Karangasem, near Abang. It is noted for its water palace, owned by Karangasem Royal.

Tirta Gangga literally means water from the Ganges and it is a site of some reverence for the Hindu Balinese. Strictly, the name refers to the water palace built in 1948 by the Raja of Karangasem, Anak Agung Agung Anglurah Ketut Karangasem. It is, however, the name widely used to refer to the general area which includes the water palace and the lush rural areas around. Tirta Gangga water palace is a maze of pools and fountains surrounded by a lush garden and stone carvings and statues. The one hectare complex was built in 1946 by the late King of Karangsem but was destroyed almost entirely by the eruption of nearby Mount Agung in 1963. It has been lovingly re-built and restored and has an air of authentic royal magnificence.

The centrepiece of the palace is an eleven tiered fountain and there are many beautiful carvings and statues adorning the gardens. The area around Tirta Gangga is noted for its rice paddy terraces. 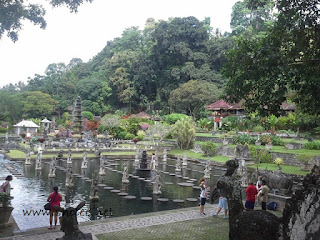 Second destination: Pura Besakih - entrance fee is IDR 60,000 per pax
Pura Besakih is a temple complex in the village of Besakih on the slopes of Mount Agung in eastern Bali, Indonesia. It is the most important, the largest and holiest temple of Hindu religion in Bali, and one of a series of Balinese temples. Perched nearly 1000 meters up the side of Gunung Agung, it is an extensive complex of 23 separate but related temples with the largest and most important being Pura Penataran Agung. The temple is built on six levels, terraced up the slope. The entrance is marked by a candi bentar (split gateway), and beyond it the Kori Agung is the gateway to the second courtyard.

I loved this temple the best! I felt so at peace, light and serenity here. Though gloomy and wet weather, it was really nice to tour around, crowded yet the walkabout was smooth and the view was to die for. This temple is a MUST visit for sure! 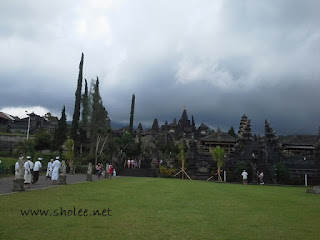 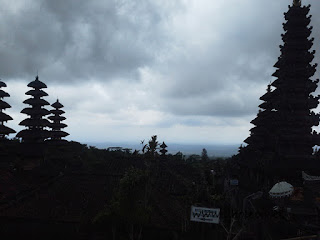 Third destination: Sate & Gulai Kambing for lunch!
This was recommended by Wayan which is why we liked him as our guide. We want local food and he knows it best! This is really good with tender meat and yummy broth! Nothing beats yummy local food and it's only for IDR 195,000 in total! 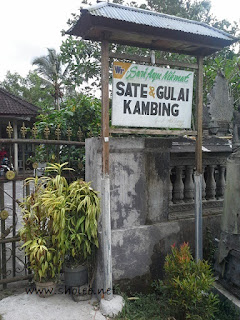 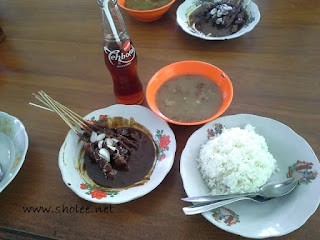 Last destination: Pura Kehen - entrance fee is IDR 30,000 per pax
The state temple of the Bangli kingdom, Pura Kehen is one of the finest temples in eastern Bali; it is a miniature version of Pura Besakih, Bali's most important temple. It's terraced up the hillside, with a flight of steps leading to the beautifully decorated entrance. The first courtyard has a huge banyan tree with a kulkul (hollow tree-trunk drum used to sound a warning) entwined in its branches.

The inner courtyard has an 11-roof meru (multitiered shrine) and there are other shrines with thrones for the Hindu trinity: Brahma, Shiva and Vishnu. The carvings are particularly intricate. See if you can count all 43 altars.

The above taken from Lonely Planet.

I've just realised the photos I've been posting are from my Samsung Galaxy Note 8.0 hence the lesser photos as we go. I did not upload those from my Nikon camera jeez!!! Thus explains the many missing photos! Well, will upload it as and when I have the time lah.

After a good shower, dinner was just around the corner near our hotel. Sadly, I couldn't recall it's name but it's authentic and yummy local food.
All in all, we totally enjoyed our tour arranged by Rai and Wayan of Bali Personal Tour. They managed our tour end to end with professionalism which I liked and ensuring we had a good time. They always make sure we do not feel rushed and have ample time to venture these sacred places with ease. Thanks again Rai and Wayan!

Next: day 4 by the beach and nothingness.
Email ThisBlogThis!Share to TwitterShare to FacebookShare to Pinterest
Sections: Travels