Our first day tour! We have been using this tour agency, Bali Personal Tour, for awhile now which was highly recommended by my cousin. Our previous tour guide was Wayan so we were looking forward to see him again but alas his colleague (I can't recall his name, thousand apologies!) came instead as his relative passed away. Nevertheless, we still proceeded as planned as our itinerary has been arranged with Rai prior.

First destination: Goa Gajah - entrance fee is IDR 15,000 per pax
Goa Gajah, or Elephant Cave, is located on the island of Bali near Ubud, in Indonesia. Built in the 9th century, it served as a sanctuary.

At the façade of the cave is a relief of various menacing creatures and demons carved into the rock at the cave entrance. The primary figure was once thought to be an elephant, hence the nickname Elephant Cave. The site is mentioned in the Javanese poem Desawarnana written in 1365. An extensive bathing place on the site was not excavated until the 1950s. These appear to have been built to ward off evil spirits.

This site was added to the UNESCO World Heritage Tentative List on October 19, 1995, in the Cultural category. 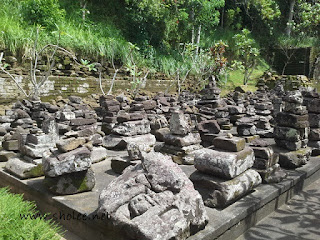 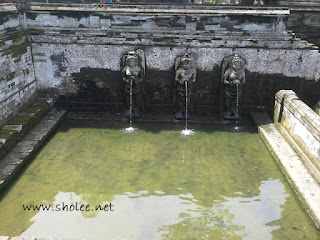 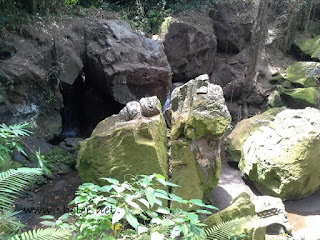 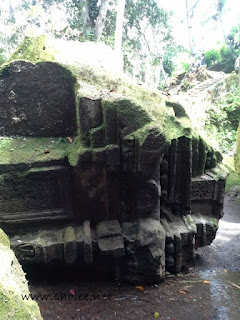 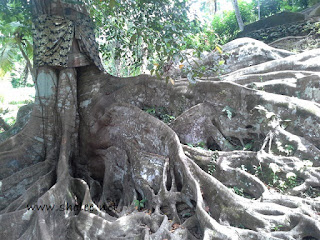 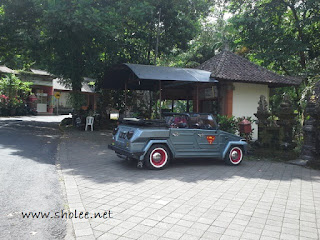 Second destination: Kintamani - entrance fee is IDR 30,000 per pax
Kintamani is a village on the western edge of the larger caldera wall of Gunung Batur in Bali, Indonesia. It is on the same north-south road as Penelokan and has been used as a stopping place to view the Gunung Batur region. Kintamani is also known for Pura Tuluk Biyu's 1,000-year-old "Rites of Peace" stone tablets and the Kintamani dog. It is situated next to Mount Batur.

Lunch time! There are several restaurants with a nice view of the said volcano. We ended up at the last one as we couldn't decide which one to go for and our tour guide was a little clueless. They served a buffet of local mixed western dishes which was average in taste with some nice hot local coffee. Lunch buffet cost IDR 133,000 per pax I think... yea not cheap and quality not as good either. The only surplus is the breathtaking view. 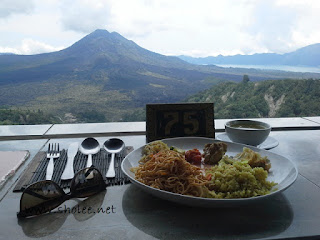 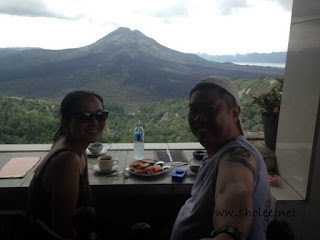 Third destination: Gunung Kawi - entrance fee is IDR 15,000 per pax
Gunung Kawi is an 11th-century temple and funerary complex in Tampaksiring north east of Ubud in Bali, Indonesia., that is spread across either side of the Pakerisan river. It comprises 10 rock-cut candi (shrines) that are carved into some 7-metre-high (23 ft) sheltered niches of the sheer cliff face. These funeral monuments are thought to be dedicated to King Anak Wungsu of the Udayana dynasty and his favourite queens. On the east side there are five temples that are dedicated, according to one theory, to King Udayana, his queen Mahendradatta, and their sons Airlanga, Anak Wungsu, and Marakata. The temples on the west side are dedicated, according to the same theory, to the king's minor queens or concubines.

Fifth destination: Tanah Lot - entrance fee is IDR 50,000 per pax
Tanah Lot is a rock formation off the Indonesian island of Bali. It is home to the pilgrimage temple Pura Tanah Lot (literally "Tanah Lot temple"), a popular tourist and cultural icon for photography.

It was literally crowded that we could not go to the temple and it was hardly easy to snap some good photos. So in the end, after resting our feet, we headed  back for dinner. 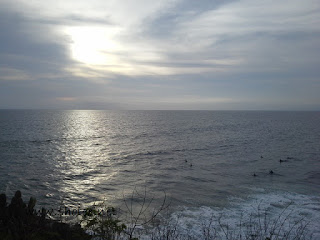 Last destination: Ayam Betutu Khas Gilimanuk
Betutu is a Balinese dish of steamed or roasted chicken or duck in rich bumbu betutu (betutu spice mix). This highly seasoned and spiced dish is a popular dish in Bali and Lombok, Indonesia. An even spicier version is available using extra-spicy sauce made from uncooked (raw) onion slices mixed with red chili peppers and coconut oil.

Betutu is a richly spiced Balinese poultry dish. It is often called according to its main ingredients; ayam betutu is chicken betutu, while bebek betutu is the duck version. This traditional dish can be found on the menu of luxury hotels or restaurants in Bali, and it is popular among tourists.

Finally, having the famous ayam betutu at Agung Bali Oleh Oleh! As suggested by our tour guide, we can kill 2 birds with 1 stone i.e. ayam betutu dinner at Gilimanuk and souvenir shopping at Agung! Firstly, the said dishes were really tasty, fragrant and spicy! Definitely worth having it though cost a little more i.e. IDR 194,700. Secondly, after dinner, we shopped for souvenir till we drop! The prices here are affordable too. The only set back was it's sooo crowded and the tourists here don't seemed to know how to queue when paying. 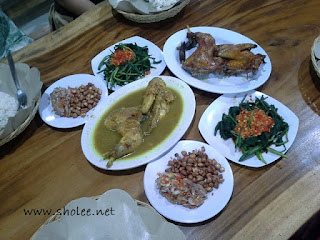 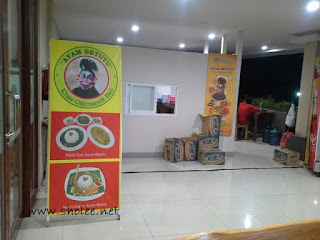 Lastly, when we were back at our hotel, we saw a motorbike man selling local street food and we bought one to try. Our so called dessert LOL! Simple, delicious and cheap for IDR 10,500. 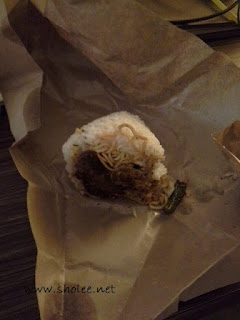 As you would have noticed, some photos are missing... not sure if I've downloaded it all but somehow I couldn't find it sigh! You can just Google lah for the images online if you want to know how those places looked like.

Next: day 3 of our second day tour
Email ThisBlogThis!Share to TwitterShare to FacebookShare to Pinterest
Sections: Travels