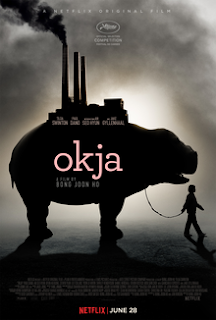 In 2007, Lucy Mirando becomes CEO of the Mirando Corporation, succeeding her controversial grandfather, her father and her cruel twin sister Nancy. She announces that they have been breeding a special kind of superpig. Twenty-six of the best pigs will be sent to locations around the world, and ten years later, one will be crowned the winner.

In 2017, a young girl named Mija lives happily in the countryside of South Korea with her grandfather and her super pig, Okja. They are visited by Mirando spokesperson and zoologist Dr. Johnny Wilcox, who declares Okja the best super pig and announces they will take her to New York City. Mija's grandfather takes her to visit the graves of her parents where he presents her with a gold pig and explains to her that rather than buy Okja, which was not allowed, he saved up the money for Okja and bought the solid gold item. Devastated, Mija runs away to Seoul to find Okja, where she sees her as she is being loaded onto a truck. Mija manages to chase down the truck which is eventually intercepted by another truck, run by the Animal Liberation Front (ALF). In the resulting chaos Mija and Okja run away causing havoc though they are eventually saved by the ALF. Recognizing that Mija is Okja's owner, they tell her that their plan is to put a recording device in Okja's ear and let her be re-captured by the Mirando corporation to show how brutally they treat their animals. Mija tells them to return her to the mountains but their translator, K, deliberately lies, causing the group to believe Mija went along with their plan. They abandon her, and Okja is recaptured.

Meanwhile, footage of Okja and Mija running through the streets of Seoul has gone viral. In order to do damage control, Lucy pays for Mija to come to New York to be reunited onstage with her pig. Okja is taken to the laboratory where she is forcibly bred with another super pig and bits of meat are extracted from her flesh for a taste test by a drunk Wilcox. Members of the ALF overhear the recording through the device they placed in Okja's ear. Jay vows to help Okja and Mija and use the recording to expose the Mirando corporation's animal abuse.

I honestly thought it was another Korean scary movie due to it's title LOL! Then I noticed the few American actors and I was like ok... and then it's about super pigs O.O

Overall, it was a good movie about humanity, a good cross-over between American and Korean with a traditional, local look and modern technology feel. Though Okja was a CGI creation, it's so realistic like any other pigs but in gigantic size. The young Korean actress definitely brought the movie to another level of sensitivity. In the end, the animal abuse made me feel nausea... it's like hinting that I should go vegan =.=

This movie did reminds me of a duck my dad had brought back many moons ago when I was around 10 years old. I had treated it like a pet, talked to it after I have returned from school every single day. But a few weeks later, it went missing. It was not there anymore. Then I saw a new dish on the dinner table... I bit my tongue and held back my tears thinking how could they?! I just couldn't eat it and have not eaten ducks ever since. Such trauma over a duck but this movie resonates with me.
Email ThisBlogThis!Share to TwitterShare to FacebookShare to Pinterest
Sections: Movies