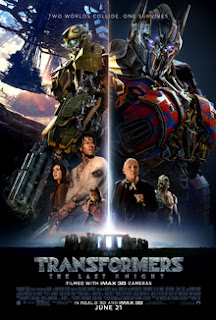 In 484 AD, King Arthur's wizard Merlin forges an alliance with the Knights of Iacon, a group of twelve Transformers who have hidden on Earth. The knights give Merlin an alien staff, and combine into a dragon to help Arthur triumph over the Saxons.

In the present day, most of the governments of Earth have declared Transformers illegal (except Cuba), and the multinational Transformer Reaction Force (TRF) has been formed to eliminate all the alien robots. Despite the absence of Optimus Prime (who left the planet to search for his creator), new Transformers continue to arrive regularly; the newest ship to arrive crash-lands in Chicago, where it is found by a group of children. When a TRF mecha confronts the kids, they are saved by Izabella, a survivor of the Battle of Chicago, and her Transformer companions Sqweeks and Canopy, but Canopy is killed by the TRF in the process. Bumblebee and Cade Yeager arrive and help them escape, but Yeager is unable to save the Transformer, Steelbane, in the ship. Before he dies, Steelbane attaches a metallic talisman to Yeager’s body—an act observed by Decepticon Barricade, who reports to his leader Megatron.

On the far reaches of the Solar System, Optimus Prime discovers that the Transformers' home world, Cybertron, now disassembled into pieces, is heading directly for Earth. Optimus finds the being in control of Cybertron's movement, a sorceress named Quintessa, who professes to be the maker he is searching for. The staff which the knights gave to Merlin was stolen from Quintessa, and using her powers, she places Optimus under her control and charges him with recovering it. Earth, she reveals, is actually Cybertron's "ancient enemy" Unicron, and she intends to drain his life force so that Cybertron can be restored.

With a thin plot and half-hearted script, this has to be the dullest Transformers I've ever watched. Though it was filled with loads of action, the story itself did not carry much weight and had me nearly dozed off a few times. It just wasn't as engaging and predictable most of the time... monotonous and noisy too. I am not surprised that Michael Bay has announced this as his last Transformers movie, I sure hoped a much better director next for the spin-off and sequel. Please don't watch this movie with high expectations and just treat this as any other CGI filled action packed movie.
Email ThisBlogThis!Share to TwitterShare to FacebookShare to Pinterest
Sections: Movies