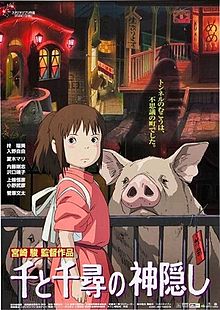 Ten-year-old Chihiro Ogino and her parents are traveling to their new home when her father takes a wrong turn. They unknowingly enter a magical world that Chihiro's father insists on exploring. While Chihiro's parents eat like pigs at an empty restaurant stall, Chihiro finds an exquisite bathhouse and meets a young boy named Haku who warns her to return across the river before sunset. However, Chihiro discovers too late that her parents have turned into pigs and she is unable to cross the flooded river, becoming trapped in the spirit world.

After finding Chihiro, Haku has her ask for a job from the bathhouse's boiler-man, Kamaji, a spider yōkai commanding the susuwatari. Kamaji already has soot spirits working for him, but he asks the worker Lin to send Chihiro to the witch, Yubaba, who runs the bathhouse; Yubaba tries to frighten Chihiro away, but she persists, so Yubaba gives Chihiro a job but renames her Sen (千?). While visiting her parents' pigpen, Sen finds a goodbye card addressed to Chihiro and realizes that she has already forgotten her name. Haku warns her that Yubaba controls people by taking their names and that if she forgets hers like he has forgotten his, she will not be able to leave the spirit world. While working, Sen invites a silent masked creature named No-Face inside, believing him to be a customer. A 'stink spirit' arrives as Sen's first customer. She discovers he is the spirit of a polluted river. In gratitude for cleaning him, he gives Sen a magic emetic dumpling. Meanwhile, No-Face tempts a worker with gold, then swallows him. He demands food and begins tipping extensively. As the workers swarm him hoping to be tipped, he swallows two other greedy workers.

Sen discovers paper shikigami attacking a dragon and recognizes the dragon as Haku transformed. When a grievously-injured Haku crashes into Yubaba's penthouse, Sen follows him upstairs. When she reaches Haku, a shikigami that stowed away on her back transforms into Zeniba, Yubaba's twin sister. She transforms Yubaba's baby son Boh into a mouse, creates a decoy baby and turns Yubaba's bird creature into a tiny bird. Zeniba tells Sen that Haku has stolen a magic golden seal from her, and warns Sen that it carries a deadly curse. After Haku dives to the boiler room with Sen and Boh on his back, she feeds him part of the dumpling, causing him to vomit both the seal and a black slug, which Sen crushes with her foot.

Finally watching this movie after crocheting many Susuwatari's LOL! An ok animation with simple storyline which was quite engaging at some point. Uniquely Asian with a few cutie's making it a favourable animation to watch. It did touched on many meaningful conscience like greed, love, trust plus don't judge a book by it's cover. Even my princess enjoyed this animation.
Email ThisBlogThis!Share to TwitterShare to FacebookShare to Pinterest
Sections: Movies