I've been looking for something short to read and I've had this book for ages! Well, I actually bought it way back then hoping my kids would read it. In the end, mommy read it lah! 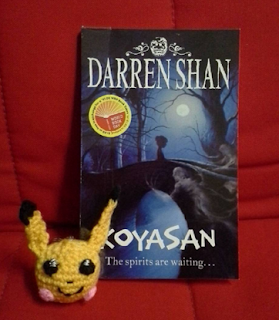 Take a step into the unknown in a spine tingling story for World Book Day from the internationally bestselling Darren Shan. The boys and girls in the graveyard were shouting, but Koyasan no longer heard them. The world had become a wide, grey void. She could hear deep rasping sounds, the breath of creatures which had been human once but weren't any more... Koyasan is too scared to cross the bridge and play in the graveyard like the other children. But when her sister's soul is stolen, she must find the courage to enter a realm of evil, shape-shifting spirits.And the spirits are waiting...

I would have expected a full fledged horror like Stephen King so I was fully prepared to be traumatized and shocked. Instead, I was intrigued and curious, the story itself was engaging... finishing it within a few hours.

The story unfolds beautifully, leading me to dream of this kampung village with an ancient bridge crossing over to a vast graveyard. Though the story is short, it was a good enough book to engage me from a young Koyasan to the aged Koyasan. It actually did feel Asian... nothing Mat Salleh of the story and it's well written.

Darren Shan is a good storyteller though I think a longer plot would do it more justice. FYI, I actually thought he's Japanese but he's actually Irish! OMG! How embarrassing!!! Well, it is definitely too short as it felt rushed in the end but in a good way. Finally I am reading a horror book which is not horrifically scary yet lovely LOL!
Email ThisBlogThis!Share to TwitterShare to FacebookShare to Pinterest
Sections: Books