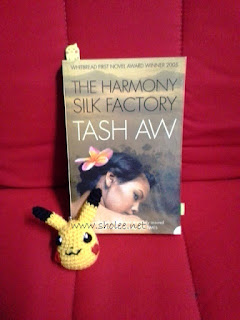 Joseph Conrad, W. Somerset Maugham, and Anthony Burgess have shaped our perceptions of Malaysia. In Tash Aw, we now have an authentic Malaysian voice that remaps this literary landscape.

The Harmony Silk Factory traces the story of textile merchant Johnny Lim, a Chinese peasant living in British Malaya in the first half of the twentieth century. Johnny's factory is the most impressive structure in the region, and to the inhabitants of the Kinta Valley Johnny is a hero—a Communist who fought the Japanese when they invaded, ready to sacrifice his life for the welfare of his people. But to his son, Jasper, Johnny is a crook and a collaborator who betrayed the very people he pretended to serve, and the Harmony Silk Factory is merely a front for his father's illegal businesses. This debut novel from Tash Aw gives us an exquisitely written look into another culture at a moment of crisis.

The Harmony Silk Factory won the 2005 Whitbread First Novel Award and also made it to the 2005 Man Booker longlist.

To be honest, reading this book was somewhat lukewarm. I guess I read it with a high expectation since it was nominated for a few awards and has won one. The outcome was a mixed reaction from me.

This book basically chronicles the life of a textile merchant, narrated from three view points. A rags to riches kind of story, Johnny Lim has led an elusive life which is why his son, Jasper, tried to collate all the details into a book. However, as it was narrated from 3 view points, it seemed lacklustre with the story panned down and still with gaps.

It started off with a strong plot. The first narration was from his son, Jasper, where it briefly noted Johnny's life from young to his death. It did get me hooked then as it was an intriguing insight. When it reached Snow's dictation from her diary, it fell short and somewhat lull. By then, I had guessed that Jasper was not Johnny's son but actually Peter's. And when the last part narrated by Peter, though he was Johnny's best friend, it somehow affirmed that he's Jasper's biological father. Here, it was messy for me and got me confused. In the end, it did straighten out and filled in some of the missing gaps but not all. I still felt the ending could have been better.

It was written in a simple, straightforward prose, Tash Aw is a good writer... in-depth and detailed but the story line could have been better plotted... not too briefed nor not too dense.
Email ThisBlogThis!Share to TwitterShare to FacebookShare to Pinterest
Sections: Books