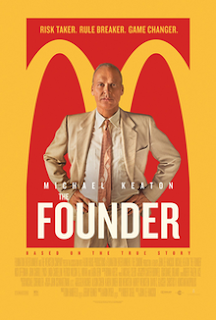 Ray Kroc is a traveling salesman selling Prince Castle brand milkshake makers in 1954. While he has a supportive wife, Ethel, and has saved enough to live a simple comfortable life in Arlington Heights, Illinois, he craves more. After learning that a drive-in in San Bernardino is ordering an unusually large number of milkshake makers, Ray drives to California to see it. What he finds is McDonald's—a highly popular walk-up restaurant with fast service, high-quality food, disposable packaging, and a family-friendly atmosphere.

Ray meets with the two McDonald brothers, Maurice "Mac" McDonald and Richard "Dick" McDonald. Ray tours the kitchens and notes the employees' strong work ethic. Dick explains the high-quality food and lightning-fast service are the backbones of their diner. Ray takes the brothers to dinner and is told the origin story of McDonald's. The next day, Ray suggests that the brothers franchise the restaurant and discovers that they had previously attempted to do so only to encounter absentee owners and inconsistent standards which ultimately led to the failure of the endeavor. Ray persists and eventually convinces the brothers to allow him to lead their franchising efforts on the condition that he agree to a contract which requires all changes to receive the McDonald brothers' approval in writing.

Initially, Ray begins building a McDonald's restaurant in Des Plaines, Illinois while attempting to entice wealthy investors (specifically fellow members at the country club he and Ethel were members of) to open franchises, but encounters the same poor management ethic which doomed the original franchise efforts. Ray hits on the idea of franchising to middle-class investors, who are more likely to be hands-on and willing to follow the McDonald's formula. This proves successful, and new franchises begin opening across the Midwest, with Ray representing himself as the creator of McDonald's. During this time, Ray meets Rollie Smith, an upscale restaurant owner in Minnesota who wishes to invest, and his wife Joan, to whom Ray is immediately attracted.

I didn't know McDonald's founder was a crook! Well that was my thought after watching this movie. He lied and cheated the real founders! I know I know, he's making way for progression and taking the opportunity which the real founders didn't want to pursue. Hmmm... Ray was an opportunist true and true but then he shouldn't be shrewd lah to the brothers. This movie definitely did not shine right on Ray as once he's rich, he got rid of his wife Ethel and woo Joan, a married woman.... jeez!

All in all, it's an eye-opener for me since I didn't know the history of McDonald's. I liked the honesty in this movie and Michael Keaton did a good realistic job. It may be a drama but with deets and gists.
Email ThisBlogThis!Share to TwitterShare to FacebookShare to Pinterest
Sections: Movies