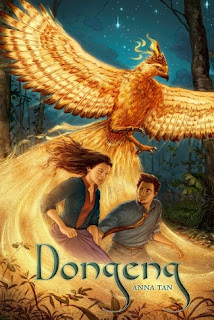 Exiled. Powerless. The world he grew up in is changing—he feels it, feels the devastation being wrought. But what can he do so far away from home?

Lost. Afraid. She’s being enlisted to help save Alam Dongeng—a magical world she knows little about. How can she tell stories she doesn’t even know?

Worried. Confused. He’s long forgotten his grandfather’s stories—it’s familiar, but he’s never really believed in them. Why should he start now?
~
Dongeng tells the story of Sara and Helmi’s awakening to magic in their own country. There’s a war to protect Alam Dongeng, helmed by the Orang Bunian and Garuda. But are the ranks of Hantu really their enemies? They may very well be fighting the wrong battle.

A sequel to Coexist, Dongeng draws you into a whole new realm of fairy tales.

The above taken from Goodreads. I have received this e-ARC in return for my honest review.

I definitely didn't expect a sequel to Coexist but as it turns out, Anna Tan sure knows how to coexist both East and West folklore's! Truly a magical weave from the current Malaysian world to an unknown realm of both the local and foreign fairy tales. It was so relatable as I can recall those myths and mysteries from my childhood days. Anna has also included the current social stigma into the story and overall made it a current Malaysian fantasy novel.

It started off slow with intro to Sara and Helmi plus the local folklore's and their dilemma. Then the pace started to pick up when the dark side intervened, had me stuck to my tab trying to finish it soonest! Interestingly enough, there's the Old Fairy Kingdom from Coexist! Although a secondary plot, it did blend in with the locals, making the story more exciting. Overall, it had me intrigued and the ending was a little unexpected as the Penglipur Lara was not the main character after all!

A nice, short story to relive some of the old folks tale, if not all. Luckily it didn't turned on the Stephen King's mode to be more of a horror or I would have bolted LOL! The best part, we have an Old Fairy Kingdom and an Alam Dongeng all in one book! I wonder will there be a third?
Email ThisBlogThis!Share to TwitterShare to FacebookShare to Pinterest
Sections: Books