MPOV: The Space Between Us 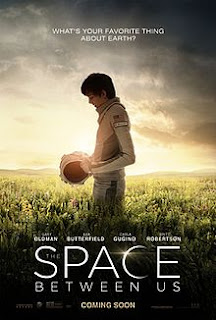 
In the near future, Nathaniel Shepard, CEO of Genesis, launches the first ever mission to colonize Mars. During the journey, the lead astronaut, Sarah Elliot, discovers she is pregnant. Shortly after landing, she dies from complications while giving birth to the first human born on Mars. The father of the child is unknown. In a dilemma, Nathaniel eventually decides to keep the child on Mars as a secret, to avoid a PR disaster for his company.

16 years later, her son, Gardner Elliot, has grown into an inquisitive, highly intelligent boy who has only ever met 14 people in his very unconventional upbringing. One day, in order to find out more about his mother, he hacks into Centaur, a robot he helped build, to gain access to the ship's storage. There, he retrieves his mother's items. Among them a wedding ring and a USB drive, from which he plays a video of her and a man in a beach house. Convinced that the man is his father, he becomes determined to find him.

Gardner logs on to an Internet chatroom, where he has struck up an online relationship with Tulsa, a street smart girl from Colorado who is constantly being shuffled from one foster home to the next. Under the guise of being confined to a penthouse due to osteogenesis imperfecta, they discuss their plans for the future. Gardner promises to come see her someday. His mother figure, astronaut Kendra Wyndham, video calls Nathaniel and Genesis director Tom Chen to inform them of Gardner's extraordinary intelligence and to beg them to allow him to return to Earth. Nathaniel refuses, as Gardner would have to undergo a highly risky surgery to increase his bone density, and then train to adapt to Earth's atmospheric pressure. Gardner undergoes the surgery anyway and after training, he, Kendra, and some other astronauts board a space shuttle for Earth.

The start of the movie somehow reminded me of Elon Musk and Space X LOL! Anyhow, the overall movie was quite engaging from start to end. It was like a dream come true, me in Gardner's shoes, exploring Mars... hmmm... *wishful thinking* Mars was so beautiful! At some point, it was kinda predictable like when Gardner was searching for his father... somehow at the start it was already known to me that Nathaniel was his father :-) Well, this is definitely for sci-fi fans, aside from the simple innocent romance, it's a good family movie to boot.
Email ThisBlogThis!Share to TwitterShare to FacebookShare to Pinterest
Sections: Movies