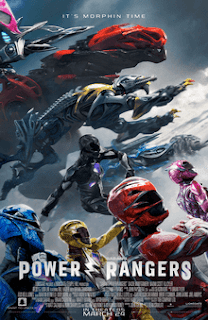 A group of warriors on prehistoric Earth, the Power Rangers, were tasked with protecting life on Earth and the Zeo Crystal. However, the Green Ranger, Rita Repulsa, betrays them. The Red Ranger, Zordon, takes the Rangers' power source, the Power Coins, and hides them while ordering his assistant Alpha 5 to perform a meteor strike which kills Zordon, sends Rita to the bottom of the sea, and destroys the dinosaurs.

In modern Angel Grove, football star Jason is thrown off the team and placed under house arrest after a failed prank. He is sent to detention, encountering Billy and Kimberly. Jason and Billy head to an abandoned gold mine to explore. Billy detonates explosives to destroy some rock, attracting the attention of Kimberly and fellow students Trini and Zack. The five discover the Power Coins just as the police arrive to investigate. While escaping, their car is hit by a train. The five find themselves at home the next day, and discover they have been granted superhuman abilities. Elsewhere, Rita's body is found. Rita rises, and goes on a rampage, taking every piece of gold that she can find in order to raise her minion Goldar to find the Zeo Crystal.

The five teenagers return to the mine, discover an ancient spaceship, and meet Alpha 5 and Zordon's consciousness. They inform the teenagers about the original Rangers and about Rita, warning them that they have 11 days until Rita has her full power and finds the Zeo Crystal and uses it to destroy all life on Earth. The five teens leave the ship with no intention of returning until Zordon pleads with Jason to convince the team to prepare for Rita's oncoming attack.

P/S: On March 22, 2017, Haim Saban detailed that he and Lionsgate already have a six-movie story arc.

I have watched the series before way back when my son was still a toddler. Power Rangers was one of his favourite then, aside from Spiderman and Pokemon. So watching this was a little odd especially with the huge cinema screen instead of the small idiot box aka TV LOL!

Anyhow, it was slow at the start and picked up pace towards the end with lots of action although not as impactful. Overall, the plots were thin and atypical Power Rangers yet entertaining at some point. Well, Goldar did attract my attention with all those GOLD in him! It also did rekindled those tender moments long ago when I watched it with my boy LOL! Funny how they wanted to make it more modern but still a little backward with CGI, technologies and all.

Apparently there was a LGBT conflict previously but it was just a 2 second scene with a hint of it and nothing more. Thank goodness it wasn't banned for no apparent reason!
Email ThisBlogThis!Share to TwitterShare to FacebookShare to Pinterest
Sections: Movies