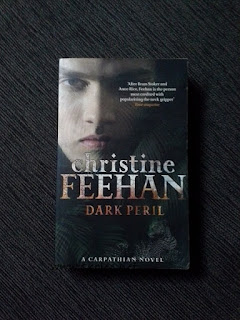 Dominic of the Dragonseeker lineage, one of the most powerful lines the Carpathian people has, ingests vampire blood laces with parasites in order to be able to go the very heart of the enemy camp and learn their plans. It is a one way mission. He knows he has little time once the parasites and the blood go to work. He plans to get in fast, relay the information to the leader of the Carpathians living in the area and go out fighting -- an honorable way to end his life.

Solange Sangria is one of the last of the jaguar people, a royal pureblood. Her people, once many are now nearly extinct, a dying species that cannot recover from the choices they made over hundreds of years. She has long been alone, fighting to save the remaining women who are able to shift, from the hands of Brodrick the Terrible, her own father who slaughtered her family and everyone she loved. Wounded, weary, she plans one last battle, hoping to stop the man who has made an alliance with the vampires, accepting she will not come out alive.

They are two warriors who have lived their lives alone. Now, at the end of their time, they find each other, a complication, neither saw coming.

I think I'm on a roll here with books which are not my cup of tea. Another first read from this author and it turns out to be book 21! What is it about book series that turned me off? After chapter 5, I just had to skip straight to the last chapter and finished it. Expected ending with much sex to seal the end of the story. I can safely say book series are a no no for me and it did seemed a little long-winded with repetitive plots. I do applaud Christine Feehan though for being able to sustain creatively and written 30 books for this Dark Carpathians series!!! Anyway, this book did reminds me of Twilight/ Mortal Instruments, in another aspect of vampire/ werewolf/ shape-shifter saga. Sorry Carpathians fans, this is just my point of view!
Email ThisBlogThis!Share to TwitterShare to FacebookShare to Pinterest
Sections: Books