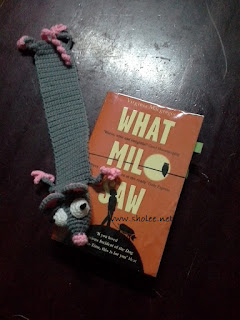 This book reminds me of Mark Haddon's The Curious Incident of the Dog in the Night-time. Though the basic plot is similar, the overall storyline differs with a different tact and twist. I totally enjoyed this light read, funny and witty at times, tackling the serious issues in life at the same time.

The story revolves around Milo who has Retinitis Pigmentosa where he can only see the world through a pinhole and eventually he could be blind forever. His predicament started when his grandmother, dad's gran, has to be admitted in a nursing home. His mother, Sandy, has been nursing a broken heart after Milo's dad left them. He had an affair with his secretary and she got pregnant. So Sandy has been struggling to pay the bills while looking after them and managing her business. In the end, she had to put gran in a nursing home as she can't cope with gran's accidental mishap at home and Milo is still a small boy to be responsible of his clumsy gran.

Milo has been plotting of ways to bring gran back before Christmas. At first, it was his whims but eventually he realized the nursing home is a fraud unlike the advertisements. Nurse Thornhill seemed friendly at first but Milo eventually discovered her cold nature. Milo wants to be a Secret Investigative Reporter like Al Clouds, a relative renting a room at Sandy's house, and his first report is to investigate the nursing home, to find the evidence to prove the wrong doings.

I liked how the book was narrated by different views, though Milo is the main one, the many voices made the story very relevant. Also the many serious issues tackled aside from the nursing home horror, like the refugees, the Syrian war, the homeless... such emotional roller coasters. Virginia's prose is simple and straightforward, so easy to understand and strongly feeling it.

I was surprised to come across the term 'love handles'! LOL!
"You don't want to get love handles like your father, Mom said, pinching the soft bits at the side of Milo's waist"

However, I did discovered an error, did you see it?
"On an sleeping bag?"

Quotable quote when Al Clouds was talking to Milo:
"I mean, it makes you focus, doesn't it? I bet you see all kinds of stuff that other people miss."