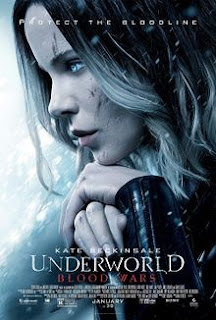 The remaining vampire covens are on the verge of being wiped out by the Lycans. Both species are searching for Selene: the vampires seeking justice for the deaths of Viktor and Marcus, and the Lycans, led by Marius, intending to use her to locate Eve, whose blood holds the key to building an army of vampire-werewolf hybrids.

Semira, a council member of the Eastern Coven, wishes for Selene to be granted clemency so that the latter can train the Eastern Coven's neophyte Death Dealers. To that end, she enlists Thomas to plead Selene's case before the full council. Thomas succeeds and Selene arrives at the Eastern Coven with David. Selene is betrayed by Varga, Semira's ally and lover, who poisons the former and slaughters the Death Dealers at the behest of Semira. Semira begins draining Selene of her blood, which she intends to drink to gain Selene's power, but is interrupted when Thomas and David come to Selene's rescue. In the ensuing fight, Thomas is killed delaying Semira and Varga so that David can escape with an incapacitated Selene.

The pair seeks refuge with the Nordic Coven. They are pursued by Alexia, an Eastern Coven vampire dispatched by Semira. Selene and David arrive at Vador, the stronghold of the Nordic Coven, where Vidar, the Elder, reveals that David was the son of the High Elder Amelia, making him the legitimate heir to the Eastern Coven.

In the same Underworld tradition, Selene fought hard to save the vampires, supposedly killed by a lycan but she suddenly awoken stronger than ever and killed the enemy. Anyway, I think I'll always remember Kate Beckinsale as Selene and no one else LOL!

Overall, it was entertaining. Just that, entertaining with all the special effects and fightings. Interestingly, it seems Selene can never die so there's a next Underworld coming but nothing has been confirmed yet.

In the end, this movie somehow reminded me of Twilight :-p
Email ThisBlogThis!Share to TwitterShare to FacebookShare to Pinterest
Sections: Movies