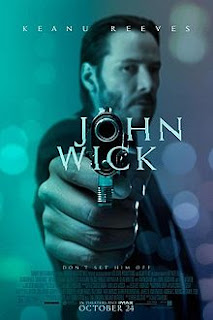 After John Wick (Keanu Reeves) loses his wife Helen to an unspecified illness, he receives a puppy named Daisy, per Helen's instructions, to help him cope with her death. He connects with the puppy and they spend their day driving around in his vintage 1969 Boss 429 Mustang. At a gas station, he encounters a trio of Russian gang members whose leader, Iosef (Alfie Allen), insists on buying his car, but John refuses to sell it. The mobsters follow John to his home that night, knock him unconscious, steal his car, and kill Daisy.

Iosef takes the Mustang to a chop shop run by Aurelio (John Leguizamo) to have the VIN changed. Aurelio recognizes the car and, upon learning that Iosef stole it from John, punches him before throwing him out of his shop. John visits Aurelio, who tells him Iosef is the son of Viggo Tarasov (Michael Nyqvist), the head of the Russian crime syndicate in New York City. Viggo, informed by Aurelio of Iosef's actions, beats and berates Iosef, explaining to him that John Wick was his best assassin, nicknamed "the Boogeyman." When John wanted to retire for Helen, Viggo gave him an "impossible task:" killing all of his competitors in a single night. John succeeded, establishing the Tarasov syndicate.

Viggo tries to talk John out of seeking retribution, but John silently refuses. Viggo sends a twelve-man hit squad to John's house, but John kills them all and has the bodies professionally removed. An unsurprised Viggo places a $2 million bounty on John and personally offers the contract to Marcus (Willem Dafoe), John's mentor. John seeks refuge at the Continental Hotel, which caters exclusively to the criminal underworld and permits no business on its premises. Viggo doubles the bounty for those willing to break the rules to kill John at the Continental.

Apparently, there will be a few sequels for this movie and this is known as Chapter 1. So I recently watched this as Chapter 2 has been released on 10/2/17 and thinking that it will be worth a shot since Keanu Reeves is the lead actor. Unbeknownst to me, it actually has a very thin plot with revenge for stealing his car and avenging the death of his dog, is John Wick's key motivator.

Surprisingly, the movie has high ratings all due to the action packed plots with ONE hero killing all the bad guys theme. I guess it's a guy thing as apparently most guys agreed it's a cool film. So definitely not my cup of tea but I did feel for John when Daisy was brutally killed. That was the only part which I could relate to the movie most. Other than that it was just another fight-filled movie for me aside from Keanu Reeves' suaveness LOL!
Email ThisBlogThis!Share to TwitterShare to FacebookShare to Pinterest
Sections: Movies