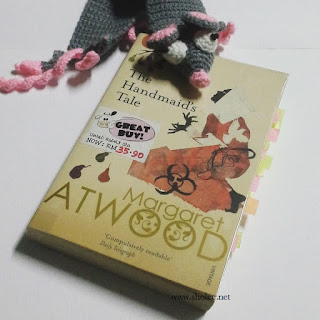 Offred is a Handmaid in the Republic of Gilead. She may leave the home of the Commander and his wife once a day to walk to food markets whose signs are now pictures instead of words because women are no longer allowed to read. She must lie on her back once a month and pray that the Commander makes her pregnant, because in an age of declining births, Offred and the other Handmaids are valued only if their ovaries are viable. Offred can remember the years before, when she lived and made love with her husband, Luke; when she played with and protected her daughter; when she had a job, money of her own, and access to knowledge. But all of that is gone now.

Surprisingly, this is my first read from Margaret Atwood. I've heard of her from the book club I am in, KLBAC, and The Handmaid's Tale was one of the books selected for discussion last year. In fact, it has been on my 'to be read' list mainly due to the attractive cover LOL!

Anyway, The Handmaid's Tale is a memoir recorded and narrated by Offred, a handmaid herself. She tells the story of how she became a handmaid, her life before the new regiment and her life after. A handmaid is like a birthing machine aka surrogate mother but the sperm was planted via the old fashion way i.e. sex and not surgery. The new regiment is uniformed, military structured and over-empowering with women having no rights at all. Their colonial way is men working whilst women stay at home, giving birth and look after the house. If their Wives can't conceive then the Husbands will be given a fertile handmaid. If you asked me, a legitimate mistress but supposedly without the lust and love. Such feelings are not allowed anymore. Even the handmaids wore hideous hats and gowns so as not to attract unwanted attention.

Every single movement is recorded hence they could afford no wrong move or they could be caught and punished in public. It truly sounds backward, with no freedom at all and women treated like an object or a doll. The people do not have freedom of speech and can't even socialize. So downright rigid like a communist. No entertainment nor festival. They can't even enjoy a cigarette which can only be bought in the black market! Totally no freedom, of choice or of anything!

It's appalling to read of such uncivilized treatment of women, had me gagged at times and speed read parts which were either unfavorable or repetitive. I understand that some fillers were to allow us to understand the scenarios but I did find it dragging lah. Overall, it was an unique, awesome imagination kinda read for me with this book being my first from Margaret Atwood. She definitely writes well with great story telling prose though I did wished it didn't need to drag on at times, no offense ya but I guess I just want to get it over with. The ending was of somewhat different from what I assumed it would be.

Some quotes from Offred, like when she thought of her previous life, her husband:

"I want Luke here so badly, I want to be held and told my name. I want to be valued, in ways that I am not, I want to be more than valuable. I repeat my former name, remind myself of what I once could do, how others saw me."

Another from her short rendezvous with her Commander:
"My presence here is illegal. It's forbidden for us to be alone with the Commanders. We are for breeding purposes: we aren't concubines, geisha girls, courtesans. On the contrary: everything possible has been done to remove us from that category."

Some new words for me:
Palimpsest - something reused or altered but still bearing visible traces of it's earlier form
Pedantic - of or like a pedant
Anachronisms - an act of attributing a custom, event or object to a period to which it does not belong
Lugubrious - looking or sounding sad and dismal
Incendiary - designed to cause fires
Emphysema - a long term progressive disease of the lungs that primarily causes shortness of breath due to over-inflation of the alveoli
Susurration - whispering, murmuring or rustling
Ignominious - deserving or causing public disgrace or shame
Somnambulant - sleepwalk

Page 247:
At first glance there's a cheeerfulness to this scene.

Apparently there's a TV series coming up on April 26, 2017 which I am looking forward to. It's up to the directors/producers imagination as the story can run wild with many speculative plots! I am just thankful the book ended differently, more enthralling at the end as opposed to the slow start. How could Margaret have thought of such plots???
Email ThisBlogThis!Share to TwitterShare to FacebookShare to Pinterest
Sections: Books