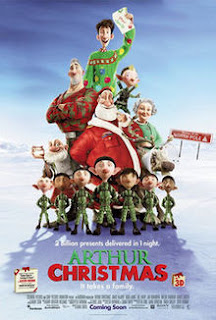 On Christmas Eve, hundreds of Christmas elves helm the command centre of Santa Claus's mile-wide, ultra–high-tech sleigh-esque craft, the S-1. The current Santa (Malcolm) and the Christmas elves deliver presents to every child in the world using advanced equipment and military precision. These complex operations are micromanaged by Malcolm's militaristic eldest son Steve and his obsequious elfin assistant Peter (among thousands of more elves) at mission control underneath the North Pole, while his younger son, the clumsy, fearful yet enthusiastic Arthur devotedly answers the letters to Santa. During one of the delivery operations in Germany a child wakes up and almost sees Malcolm; in the tense escape operation, a Christmas elf aboard the S-1 inadvertently leans on a button, causing a present to fall from the supply line and go unnoticed.

Having completed his 70th mission, Malcolm is portrayed as far past his prime and whose role in field operations now is largely symbolic. Nonetheless, he is held in high esteem, and delivers a congratulatory speech to the enraptured elves. Much to Steve's frustration, who has long anticipated his succeeding the role and prepared for this mission to be the handover, Malcolm announces he looks forward to his 71st. During their family Christmas dinner, Arthur's suggestion for the family to play a board game degenerates into a tense quarrel between Malcolm and Steve, while Malcolm's father and predecessor Grandsanta, bored by retirement, resentfully criticises their over-modernization. After Grandsanta knocks the board off the table, Steve's PDA (a high tech device named a 'HOHO') flashes and he leaves the table in a hurry. Later, their father shares with his wife Margaret his grave doubts about his self-identity should he retire.

Arthur follows Steve, and the two learn that a Christmas elf named Bryony found the missed present — a wrapped bicycle for a little girl in England called Gwen, to whose letter Arthur had personally responded. Arthur alerts his father, who is at a loss as to how to handle the situation; Steve argues that one missed present out of billions is an acceptable error whose correction can wait a few days, citing this year's Christmas as the most successful in history. Grandsanta on the other hand, on learning of the dire situation, proposes delivering the gift using Eve, his old wooden sleigh, and the great-great-grandchildren of the original eight reindeer, forcefully whisking away a reluctant Arthur and a stowaway Bryony. In the process the three get lost in three different continents, lose several of their reindeer, and land in danger several times, ultimately being mistaken for aliens and causing an international military incident. Through all this, Arthur eventually learns, to his compounding disappointment, that Grandsanta's true motive is to fulfill his ego. Steve refuses to help them out of petty resentment and possibility of his brother being made hero overshadowing his work and that his own father has gone to bed, apparently content even though a present was not delivered.


The above taken from Wikipedia.

This is truly a heartfelt movie which I've enjoyed with my family. So true that technologies have taken over human's intelligence including Santa's job as indicated in this movie. There's no human touch nor satisfaction for the old school Santa. Everything is controlled by technologies, even the sleigh which has turned out to be a space craft. So this movie takes a good look at human nature vs technologies.

Technologies and gadgets do dumb humans down.