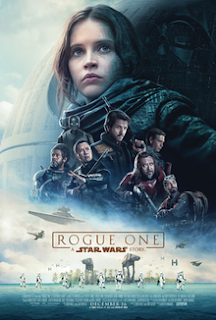 Research scientist Galen Erso and his family are in hiding on the planet Lah'mu when Imperial weapons developer Orson Krennic arrives to force him to return to work on the unfinished Death Star project, a space station-based superweapon capable of destroying entire planets. Galen is taken away and his wife Lyra is killed in the confrontation, but their daughter Jyn escapes and is taken to safety by Rebel extremist Saw Gerrera.

Fifteen years later, pilot Bodhi Rook defects from the Empire, smuggling a holographic message from Galen to Gerrera on the moon of Jedha. Meanwhile, Jyn is freed from Imperial captivity by the Rebels, who plan to use her to track down her father. However, General Draven covertly orders Rebel intelligence officer Cassian Andor to kill Galen rather than extract him.

Jyn, Andor, and his droid K-2SO travel to Jedha, where the Empire is mining Kyber crystals to power the superweapon while Gerrera and his partisans are engaged in an armed insurgency against them. With the aid of blind warrior Chirrut Îmwe and mercenary Baze Malbus, Jyn makes contact with Gerrera, who is holding Rook captive. Gerrera shows her the hologram, in which her father explains that he has covertly compromised the Death Star's reactor design, directing them to find the plans at an Imperial high-security data bank on the planet Scarif.

For those who are worried about not watching any Star Wars movie before or cannot catch up, fret not as Rogue One is stand alone. Though part of Star Wars, this is the prequel way before and the only relation is the Death Star with tiny bits related to Darth Vader, C3PO and R2D2... also a tiny bit of Princess Leia. So you won't get lost ya...

Overall, this movie was entertaining with much better and realistic CGIs. Even the plots were more relevant though some were kinda predictable. However, I didn't expect the ending until towards the end when the Death Star was activated LOL. Thoroughly engaging for me and the new droid K-2SO is truly memorable... worthwhile to watch it in the cinema :-)