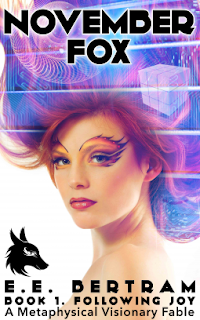 November Fox has never even heard of other dimensions when a teleporting magical cube appears on her doorstep. With a hole in her heart and a cosmic identity yet to be discovered, the orphan rock star accepts an invitation to find the key within herself that will unlock the mysteries of form.

Little does she know, The Architect, from the race of philosophical beings who create our world of form, has been watching over her all her life.

Grieving Erica, a teacher and writer from London, finds The Architect’s fascinating letter in a glass bottle washed ashore on Brighton Beach. Pages continue to magically appear as she, too, is compelled to follow November’s quest.

Realities eclipse as we embark on a metaphysical adventure through time and space. November learns that harnessing the power of her mind and heart is fundamental, if she wishes to unlock the cube and escape the sometimes sinister, sometimes wonderful dimensions into which she is propelled.

Combining elements inspired by the new thought movement, the law of attraction, magic, mysticism, wisdom and wonder, November learns that she can use the power of dreaming, imagination and positive thinking to remake herself and her world.

November Fox will be enjoyed by readers who liked wisdom-filled, visionary fiction fables like “The Alchemist,” the escapism of “Alice in Wonderland” or the Mind-bending nature of the movie “The Matrix.”

As an idiosyncratic fantasy/science fiction crossover, it is suitable for teens and adults alike.

It comes with 39 illustrations with an Augmented Reality technology feature, enabling readers to further expand their experience.

“Things aren’t always as they seem, do we wake or do we dream?”

The above taken from NetGalley. Goodreads rating: 4.75

Note: I have received this e-ARC from the publisher via NetGalley in exchange for my honest review.

Initially, I was attracted to the cover design, creatively drawn and attractive thus prompted me to accept a copy of the e-ARC. However, the more I read, the more confused I became. Not sure if it was the format received or I was not in the right frame of mind to read it. One thing is for sure, it did reminds me of the current TV series, Westworld, unless I've misunderstood the story line.

This visionary fiction did have quite a following so don't listen to me since I couldn't finished it. I've had the softcopy for sometime now and it was not engaging enough to catch my attention to continue. Tumbling to and fro the softcopy was truly unfriendly for me as I find the flow a little messy hence the confusion. Perhaps I'll pick up a hardcopy in the future as I do feel it would have been a much better read as there are some illustrations included. So go ahead if metaphysical/ augmented reality is your kind of read.

Sorry, Esther, this is not my cup of tea for now!