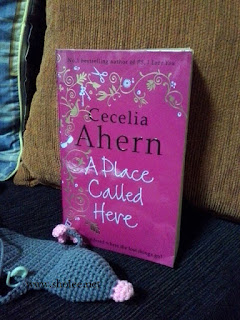 People typically lose things anytime, anywhere. Whether it's at home or at work, or even at play, we either find it or lose it forever. As for Sandy Shortt, it is a MUST to find it... regardless where or how. All of this started the day Jenny-May Butler went missing. Sandy became obsessed... if one sock went missing in the dryer, she has to find it, by hook or by crook. Even her parents have relented and will help to accommodate Sandy's obsession.

As she grows older, her parents led her to join the school's therapy session with Gregory Burton once a week. They had gotten along pretty well and had become lovers after Sandy has started working. Currently working on a missing person's case, she was due to meet Jack Ruttle at Limerick but somehow got lost herself while jogging near the woods.

Sandy has miraculously ended up at a place called Here where all the missing people and things have gone to. They have created a life there with many different communities, in a world of their own and not able to leave that place even if they wanted to. Though overwhelmed, Sandy managed to meet a few of these people who were in her case files and was able to update them indirectly of their loved ones.

Due to Sandy's obsession, she has finally found her closure and letting go of her obsession slowly but surely. She has also realised what her obsessions have caused her to lose and it opened up her eyes to the reality in front of her. Her main trigger button was Jenny-May Butler and upon finding her, Sandy was able to reflect and let go, her final closure.

This book truly reflects on the obsessiveness of some human being, how they can overcome it and eventually letting go. It is not an easy feat especially when it comes to mental OCD, definitely a hard habit to break. Well, this is just my thought as this book sums up about Obsessive Compulsive Disorder for me LOL!

I did enjoy the plots, nicely written and paced well. Though it's predictable midway onward, it was still entertaining but it had me speed read towards the end. Well, I just wanted to know if she goes back to Gregory and skipped the fillers LOL! All in all, a good read lah!
My rating: 3/5
Goodreads rating: 3.7/5