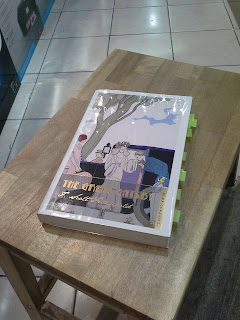 This book follows the story of Nick Carraway, who has just shifted to the West Egg and had just begun his new job as a bond seller. In his own narration, we see through his eyes how he had met his rich neighbour, Jay Gatsby, and the little chaotic world he lived in. His cousin, Daisy, and her husband Tom lived at East Egg which happened to be opposite from them. It all began as a normal New York lifestyle of the swinging twenties, eventually invoked jealousy and treachery that leads to death and tragedy in the end.

At the start, it was slow with all the intros and lengthy prose, from his family to Daisy, Tom to Myrtle, that I started to feel disinterested. The mismatched characters did build up an interesting story i.e. Daisy seemed dense unlike Jordan who's on a different wavelength with an egoistic brat Tom. The flow did felt disengaged at first until Nick mentioned the intention towards the end of chapter 3.

Slowly but surely, it did picked up pace after the unnecessary fillers like the people Nick met at Jay's party and more. Then the drama picked up with the true reveal of Jay's obsession aside from his shady past. In the end, in summary, it's a tragic love story.

A clever way of writing it, as though the author was imagining and drafting a screen play. He thoroughly described the characters so that we understand who, what and where. This is where I felt a little lengthy but I guessed that's how you write way back then in the twenties. It definitely needs getting used to since it's a different style then. However, towards the end, all was forgotten except the story itself. Yes, I was truly engrossed by then as I now understand better as the drama unfolds.

I've watched the movie first hence initially I felt the movie showcased it better but towards the end, I do feel the book is better. So it's a 50/50 thing here LOL! Mind you, I actually felt melancholy when I've finished reading it. My mind was swirling with the tragedy. I couldn't comprehend the overwhelming sense of loss that Nick felt, when he tried to arrange the funeral and all... Fitzgerald wrote pretty darn well.

It's a fact proven here that humans nowadays were no different way back then, the values... the morals... the greed. When alive, everyone was like a leech, sticking on to every penny. Once dead, you are forgotten just because of some dirty rumours. Same old, same old pattern here.

Some new words, or old LOL, for me:
Epigram - a pithy saying or remark expressing an idea in a clever and amusing way
Extemporizing - compose, perform or produce something such as music or a speech without preparation; improvise
Rotogravure - a printing system using a rotary press with intaglio cylinders, typically running at high speed and used for long print runs of magazines and stamps
Oculist - an ophthalmologist or optometrist
Prodigality - extravagance, waste
Echolalia - meaningless repetition of another person's spoken words as a symptom of psychiatric disorder
Asunder - apart; divided
Dissension - disagreement that leads to discord
Armistice - an agreement made by opposing sides in a war to stop fighting for a certain time; a truce
Antecedents - a thing or event that existed before or logically precedes another
Caravanserai - a group of people traveling together
Portentous - of or like a portent
Expostulation - an act or and instance of expostulating
Redolent - strongly reminiscent or suggestive of something
Pasquinade - a satire or lampoon

My copy is from Alma Classics and I loved that it includes Francis Scott Fitzgerald's history such as some photos of his family and his other works. With such a beautiful cover, this book is definitely a keeper.