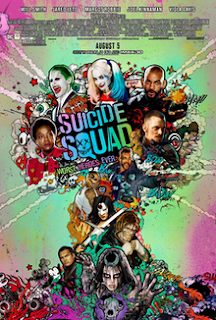 In the aftermath of Superman's death, intelligence operative Amanda Waller assembles a team of dangerous criminals—the deranged Harley Quinn; elite hit man Deadshot; pyrokinetic ex-gangster El Diablo; opportunistic thief Captain Boomerang; monstrous cannibal Killer Croc; and specialized mercenary Slipknot—at Belle Reve Penitentiary and places them under command of Colonel Rick Flag, to be used as disposable assets in high-risk missions for the United States government. Each member has a small bomb implanted in their neck, designed to detonate should any member rebel or try to escape.

One of Waller's intended recruits is Flag's girlfriend, Dr. June Moone, an archaeologist who is possessed by a witch-goddess known as "Enchantress" after touching a cursed idol. Enchantress quickly turns on everyone, deciding to eradicate mankind for imprisoning her. She besieges Midway City with a horde of monsters, begins creating a weapon, and summons her brother, Incubus, to assist her. Waller then deploys the squad to extract a high-profile mark from Midway. However, the squad is briefed and put under the impression that what is going on in the city is a terrorist attack.


Ahead of their departure, they are joined by Katana, who wields a mystic sword and acts as Flag's bodyguard. Harley's lover, Joker, finds out about her predicament and tortures Griggs, one of Waller's men, into leading him to the facility where the nano bombs are made. He blackmails one of the scientists involved in the program into disabling Harley's bomb. On their approach their helicopter is destroyed, forcing them to proceed on foot to their target. On the way, Boomerang convinces Slipknot that the bombs are a ruse meant to keep them under control. Slipknot attempts to escape and is killed, while the team is attacked by Enchantress' minions. The team manages to escape to their final destination at a safe room, where they learn that their mark is Waller herself, who is attempting to cover up her involvement.

This movie is truly one of it's kind, like a mix between Kickass and Deadpool. Though not as vulgar and gory, it's production was not as well plotted nor produced smoothly. There were some kickbacks but overall very entertaining.

I especially liked Hailey! She's so original, adorable and full of zest! Margot definitely fitted the role like a glove! The rest of the casts were as good but Margot totally stands out! You'll know when you watch the movie.

Some of the plots were thin and predictable plus some annoyingly unrealistic like Amanda... won't die and no injuries either. I know, it's just a comic produced movie so can't have too high expectations. Just watch and be entertained, set your bar low ya.

The sequel will be shot in 2017 so I wonder when will it be out. Also the mid-post credit trailer leads to Justice League *feeling excited*