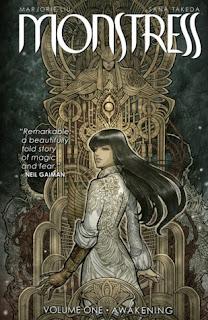 Monstress Collected Editions #1
Note: I have received this e-ARC from Edelweiss in exchange of my honest point of view.

Set in an alternate matriarchal 1900's Asia, in a richly imagined world of art deco-inflected steam punk, MONSTRESS tells the story of a teenage girl who is struggling to survive the trauma of war, and who shares a mysterious psychic link with a monster of tremendous power, a connection that will transform them both and make them the target of both human and otherworldly powers.

New York Times bestselling and award-winning writer Marjorie Liu is best known for her fiction and comic books. She teaches comic book writing at MIT, and leads a class on Popular Fiction at the Voices of Our Nation (VONA) workshop. Ms. Liu's extensive work includes the bestselling "Astonishing X-Men" for Marvel Comics, which featured the gay wedding of X-Man Northstar and was subsequently nominated for a GLAAD Media Award for outstanding media images of the lesbian, gay, bisexual and transgender community. Prior to writing full-time, Liu was a lawyer. She currently resides in Boston.

Sana Takeda is an illustrator and comic book artist who was born in Niigata, and now resides in Tokyo, Japan. At age 20 she started out as a 3D CGI designer for SEGA, a Japanese video game company, and became a freelance artist when she was 25. She is still an artist, and has worked on titles such as "X-23" and "Ms. Marvel" for Marvel Comics, and is an illustrator for trading card games in Japan.

The above taken from Edelweiss.

Unfortunately, I got this by accident thinking it's a novel. To be honest, I was captivated by the stunning cover hence I quickly downloaded it. When I finally had the time to read it then only I realised it's a graphic novel. This is my first so I gave it a try and slowly discovered it's not my cup of tea.

Fully illustrated by Sana Takeda, it was so detailed with as much angst and gory that it did turned me off a bit. I think I scrutinised it a bit as I didn't realised graphics can be so realistic yet vulgar and I tried my best to enjoy it. In a way, I now understand why it's such a biggie for anime lovers.

The story itself is kinda good actually. Marjorie is a badass lawyer as she truly can envisioned such fantasy! I think I would have enjoyed more in the writing format and not the graphic form. Of course, the comic version is more lengthy with less words needed so the thrill for the next novel builds up easily in illustration as opposed to writing.

Alas, I have to admit defeat, even though I enjoyed the story, I wasn't into the graphics. So the higher rating is more for the efforts pumped in by both authors. I'm not surprised it's one of the top as the significance of the book, the quality and uniqueness says it all.