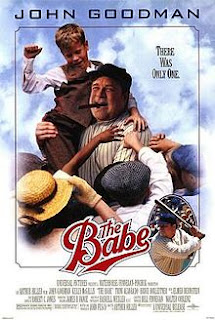 The story begins in 1902 in Baltimore, Maryland, where a seven-year-old Babe Ruth, troubled and not-so disciplined, is sent to the St. Mary's Industrial School for Boys, a reformatory and orphanage. Ruth is sent by his father, George Herman Ruth Sr. (Bob Swan), who cannot handle raising the boy. At the school, Ruth is schooled by Catholic missionaries and is made fun of by other children, because of his large size. Brother Matthias Boutlier (James Cromwell), the Head of Discipline at St. Mary's, first introduces Ruth to the game of baseball. During a session of batting practice, Ruth hits several towering home runs off of Matthias, who is pitching. Brother Matthias and others are stunned by Ruth's amazing power to drive the ball.

The film then flashes forward to 1914. A 19-year-old Ruth (Goodman) is on St. Mary's baseball team. Ruth continues to excel as a powerful hitter and a great pitcher. Ruth's amazing skills come to the attention of Jack Dunn (J.C. Quinn). Since Ruth is underage, Dunn decides to adopt Ruth and sign him to a contract with the Baltimore Orioles. In the middle of the 1914 baseball season, Ruth is sold to the Boston Red Sox. As a member of the Red Sox, Ruth begins to gain wide attention for his home runs and becomes popular in Boston. However, he angers Red Sox owner Harry Frazee during a party, and following the 1919 season, Ruth demands a raise, and a suite for road games, so Frazee sells him to the New York Yankees to finance his Broadway shows, which had cost him money ($125,000, equal to $1,706,094 today, the same amount of money that Frazee got for selling Ruth to be exact). Ruth becomes very popular in New York, as he helps the Yankees win the World Series in 1923. Also, in one game, he hits two home runs for a little boy named Johnny Sylvester, whom he had recently visited in hospital. However, two years later, after divorcing his first wife, Helen Woodford (Trini Alvarado), Ruth starts to go into a slump, while teammate Lou Gehrig (Michael McGrady) becomes known as the "Iron Horse". After getting pelted with lemons during a game, he gets angry and storms onto the dugout, yelling at the crowd, who continue to pound him with lemons. He also takes a second wife Claire (Kelly McGillis), but that becomes complicated too.

However, in 1927, Ruth returns to his old self and hits 60 home runs, breaking his old record of 59 home runs. In 1932, during the World Series against the Cubs, in Game 3, Ruth, during an at-bat, points to center field and hits a towering home run, "calling his shot".

An interesting take on Babe's life, though slow at times but well portrayed. As he had grown up locked in an industrial orphanage, Babe basically was still a small boy at heart when he left to join the big league. As such his mannerism impaled while picking up all the bad habits like womanizing, drinking and smoking. He truly enjoyed his freedom to the fullest, as though not wanting to lose it again and not to be cooped up in the orphanage.

Thankfully he has a heart of gold, loving children and always helped them whenever he can afford to. It's sad that he didn't fathered any of his own. Or else he could have his own legacy to be carried forward. But it's definitely a wonder with his size and all, Babe can still hit a home run any time! This truly amazed me! A gifted 'huge' baseball player with a golden heart.

John Goodman did fairly well as I was so into it, though at times, it did drag a little. At least now I know Lou Gehric was Babe's rival back then. It's funny no matter how healthy one can be but still vulnerable to a lesser known disease like ALS. As for Babe, with his much smoking and drinking, he finally died of throat cancer. Such wasted talents.

A simple, less impacting movie to watch. Well, it's a memoir so as long as the facts are right, fine by me.