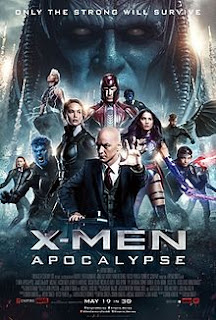 En Sabah Nur, a powerful being believed to be the first mutant, rules over ancient Egypt until he is betrayed by his worshippers, who entomb him alive. His guard of four lieutenants die, using their powers to safeguard him. Accidentally awakened in 1983, he observes the new world and believes that humanity has lost its way without his presence. Aiming to destroy the modern world to remake it, he recruits Cairo pickpocket Ororo Munroe, who can manipulate weather elements, and upgrades her power. Her hair is aged white in the process.

In East Berlin, shape-shifting Raven investigates an underground fight club and discovers mutant champion Angel, who possesses a pair of large feathered wings on his back, and Kurt Wagner, who can teleport. Raven frees them and employs the services of black marketeer Caliban to transport Kurt to America. En Sabah Nur recruits Caliban's enforcer, Psylocke, who leads him to Angel. En Sabah Nur then enhances both their powers, transforming Angel's wings into metal and amplifying her psionic skills.

Alex Summers discovers that his younger brother, Scott, is manifesting his mutation of powerful optic energy. Alex takes Scott to Professor Charles Xavier's educational institute in Westchester County, New York in hopes that Xavier and Hank McCoy will teach him how to control his abilities. Scott meets the telepathic and telekinetic Jean Grey, and the two develop an attraction. Raven brings Kurt to the institute. Apocalypse's awakening has caused disturbances around the world, leading Xavier and Alex to consult with CIA agent Moira MacTaggert, who has been researching the legend of Nur.

The overall movie was entertaining, quite intense at some point and much darker... is it a trend now? Anyway, it was very gory with loads of dark side moments. Not sure if it's influenced by the new evil character, Apocalypse. Also some of the CGIs were not as realistic and I think it could have been better. Honestly, Apocalypse reminded me of a purple alien from another movie... just can't recall which one. But it's nice to know how Storm, Cyclops, Quicksilver and Jean Grey started of and got together plus Nightcrawler is so funny! Also Moira connecting with Charles again and she has a son apparently so there could be a sequel.

FYI, there's a post credit trailer right towards the end which I've missed. Apparently it's related to the next Wolverine coming next year. Ahem... also The Dark Phoenix Saga could be coming soon...